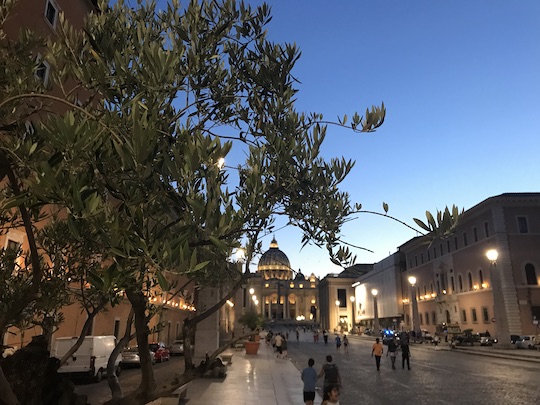 The Basilica Papale di San Pietro is currently accessible from Via della Conciliazione, an avenue that links the Vatican City to the center of Rome, from the Castle of Sant’Angelo on the northern bank of the Tiber River to St. Peter’s Square. The dome is elevated and surrounded by Bernini’s portico, which has a conical perspective, in which pilgrims or visitors are able to take in the grandeur and scale of the fantastic monument.

This avenue did not look like this at the beginning of the last century. In order to get to the plaza, one had to go through a maze of narrow, curved and dark streets lined with Medieval and Renaissance buildings before getting hit with an immense amount of light and vigor coming from St. Peter’s Square.

It was in 1929 when Mussolini and Pope Pius XI signed the Treaty of Lateran, in which the relations between the Italian Government and the Catholic Church were reestablished. The Holy See gained political independence from the Kingdom of Italy in the form of a Sovereign State, and Roman Catholicism became the official state religion of Italy. As a symbol of this reconciliation, Mussolini built the Via della Conciliazione, which destroyed part of the Borgo, including a number of Renaissance and medieval buildings, giving rise to the avenue that would connect the Vatican state with the center of Rome.

Just like in certain occurrences in the Bible, olive trees have been present and have been a symbol of union, peace, prosperity and protection. Such as in the old testament, which God deigned to establish the Old Covenant with his village and said,“you can not forget that it is nourished by the root of a good olive tree in which the wild olive shoots have been grafted as a symbol of their covenant.”

Once again, olive trees prove to be a symbol of protection. A total of 20 olive trees of the Frantoio variety guard the avenue which leads to the most important basilica in Catholicism.