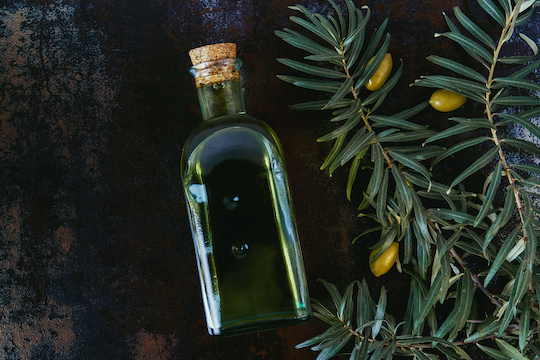 The olive tree is a tree that is part of the history of mankind, starting in the Mediterranean region and then spreading to all five continents. Its history has been the subject of many stories that have made up the mythology of the tree and its by-products, olives and olive oil. However, these stories refer to a relatively short period in the process of domestication of the olive tree and the beginning of its use as a food source by man.

Its origin is lost in time and the historical and biological evidence goes back millions of years. The genus Olea is represented by several species distributed in Europe, Asia, Africa and Oceania. The species Olea europaea, is the one that in the course of time gave rise to what we call the «cultivated olive tree» today (Green and Wickens, 1989; Browicz and Zielinski, 1990).

Domestication is an example of plant-animal co-evolution that intersects with human evolution. This practice developed during the Neolithic period, between 12 and 15 thousand years ago, consisting of human use of plant and animal species leading to morphological and physiological changes that distinguish domesticated forms from their wild ancestors. It was one of the most important technological innovations in human history (Puruganan et al. 2009).

This process has been long and continuous and has involved numerous genetic exchanges between cultivated and wild trees. There is genetic evidence of its occurrence in the western and eastern Mediterranean basin indicating that wild olive trees were isolated in two distant areas, a pattern congruent with that of many other tree and shrub species. The higher diversity of the eastern Mediterranean basin lineage suggests that wild olive originated in this area (Lavee & Zohary, 2011; Díez et al. 2015; Besnard et al. 2018).

Striking is the phylogeographic structure in populations of the olive fruit fly considered the main pest of cultivated olive, which also shows three lineages with a specific distribution in the Levant (eastern Mediterranean), the Aegean area with continental Italy and the western Mediterranean basin. These geographical subdivisions may thus reflect three main refugia during the Quaternary glaciations that are hypothetically shared with their host.

The cultivated olive Olea europaea subsp. europaea var. europaea L originated from Olea europaea subsp. europaea var. sylvestris (Mill) Lehr by artificial selection from wild populations. Based on wild samples and cultivars from the northern region of the Israeli Levant (area near the Syrian/Turkish border) this area is proposed as the main center of olive domestication, 6,500 years BC ago (Figure 1-a) (Barazani et al. 2016).

In this area, wild olive tree populations grow and can be found in the Mediterranean maquis (overgrown fields) (Figure 1-b) and garrigues (ecosystems resulting from human overgrazing) (Figure 1-c) of the Carmel and western Galilee mountain ranges. Genetic techniques were used to determine the information possessed by these wild populations and abandoned feral forms resulting from hybridization between wild and cultivated trees. Trees from areas distant from cultivated areas that indicated a presumably wild origin were also analyzed. These were then compared with old grafted olive trees and cultivated olive trees from different populations.

Two of the sites could be considered as wild, confirming the presence in Carmel and Galilee (Figure 1-a), of populations genetically similar to the «oleasters» of Turkey and Syria. Based on evidence that most of the old olive trees in the southeastern Mediterranean were maintained by grafting (> 80%), the genetic similarity of the two wild populations and the varlets of the old cultivated olive trees would imply that domesticated olive trees were grafted onto wild trunks.

It can be concluded that some of the plantations analyzed as Olea europaea subsp. europaea var. sylvestris were used in the past as rootstocks. It is more likely that the first domesticated olive gene pool spread with agriculture, first throughout the Levant and Cyprus before spreading throughout the western Mediterranean. Genetic evidence of previously reported multilocal origins of cultivars may be explained by secondary domestication events involving crosses between newly introduced cultivars and local oleasters throughout the Mediterranean.

The dating of these mounds was supplemented by studies of thousands of crushed pits and olive pulp found in pits at the prehistoric settlement of Kfar Samir on the Carmel coast south of Haifa (Israel) (Figure 2)(Galili et al. 1997). Observations at this site, and at another late Neolithic to early Chalcolithic coastal settlement, recorded that olive oil processing technology began along the Carmel coastal plain 6500 years ago, approximately 500 years earlier than previously held. These findings were chronologically dated based on the Carbon 14 dating, allowing them to assure when the beginning of olive oil production occurred along the southern Levantine coast during the seventh millennium BC.

At this site, fragments of epidermis and olive fruit pulp similar to those resulting from the oil production process were found (Figure 3-a), as well as remains of crushed olive pits with sharp edges (Figure 3-b,c), and remains of pollen. All these elements were accompanied by mortars (Figure 4-b), tools, weaving mats (possibly for the separation of solid and liquid phases).

The geographical location of this site, which is 15 km from Carmel, allows us to assume that the remains of processed fruits and pollen came from the olive trees found in that area, described by Barazani et al (2016).

Deposits with whole olive pits were also found (Figure 4-a), which, due to their proximity to salt water sources, could have been used for the processing of olive fruits for food.

These two facts put in context allow us to propose the coast of Israel south of Haifa and west of Carmel as the oldest site showing together olive industrialization (Galili et al. 1997) and domestication of wild olive trees at approximately 6500 years B.C. (Barazani et al. 2016). 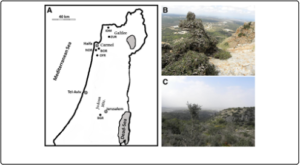 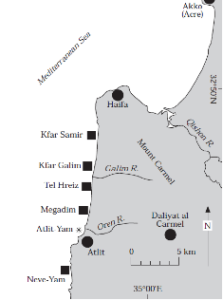 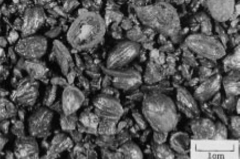 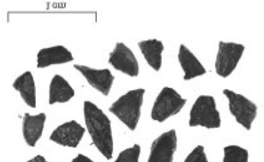