CAN AN OIL MILL FUNCTION NON STOP FOR 5 CENTURIES? 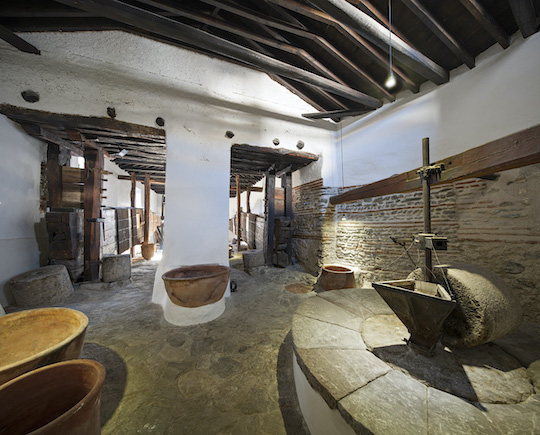 In the Granada region of the Lecrin Valley, there is a municipality called Nigüelas. This region is located in the southwestern end of the Sierra Nevada mountain range, south of the province of Granada. It is an agricultural area, and has been one of the main livelihoods of the entire population and has the same Arab infrastructure hydraulics system that captures water from the middle and high course of the rivers and channels it through ditches to supply the population centers – through reservoirs, fountains and laundries and agricultural plots; mainly composed of olive trees, orchards and fruit trees.

In the town of Nigüelas, there are not only these ancestral hydraulic infrastructures that make up the typical landscape of this region, but there is also the Las Laerillas mill, a peculiar press mill that was founded at the end of the 15th century.  Its machinery and structure have been preserved until this day, and the mill has been the main economic axis of the municipality. This is mainly due to the fact that the oil mill has been fully operational since 1942. Its construction dates back to the 15th century but it is believed to have been previous Arab oil mill that was later reformed.

Las Laerillas has a patio with a barn for olive growers to deposit the olives to, a place to store the olive exudate and a mill composed of two beam presses arranged in parallel order, with two chapels under the counterweight tower, with a rectangular and tiled roof. Also, there is a space with mill stone powered by hydraulic power, which is moved by the artificial waterfall that can be found under the building. This appears under the hearth, and is covered by a stone vault. These pieces are essential to understand the engine mechanism of the hydraulic mill and, therefore, the operation of the whole of the olive mill and its relationship with the ditch that runs along Canalón Street. Thanks to the restoration works, the internal part of the mill has been discovered, both the solid steel counter wheel and the wooden spruce that, after five centuries in full operation, still remains intact.