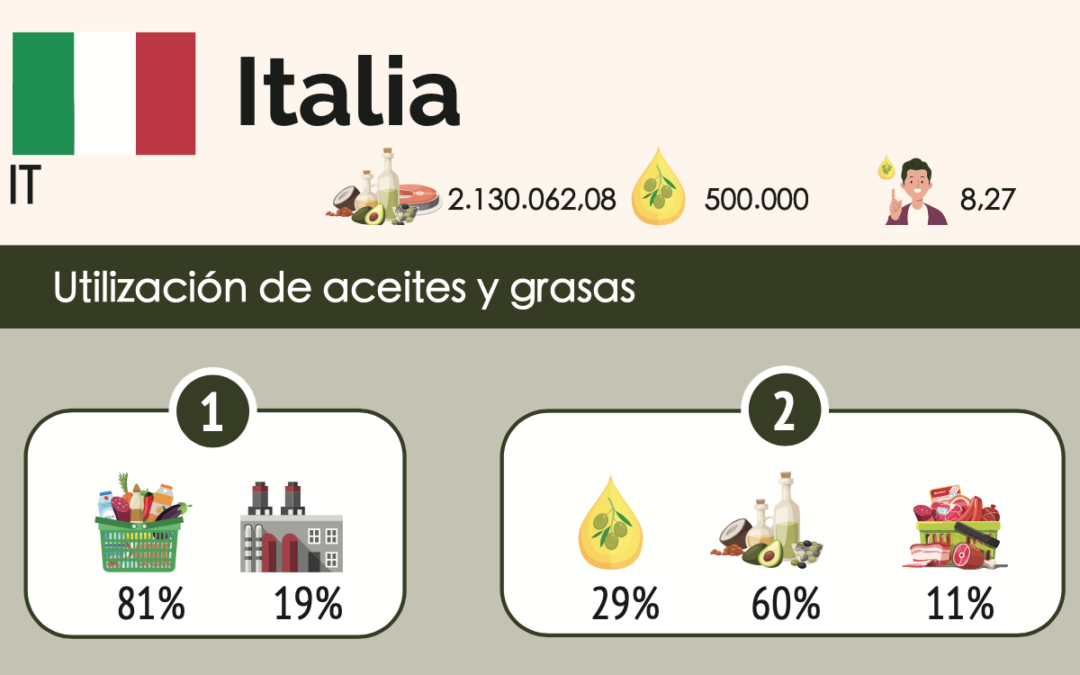 Several Italian regions activate the red alert declaring a state of emergency due to drought and low rainfall forecasts, all aggravated by heat waves. This is the worst water situation in 70 years.

They are facing a really serious situation, many agricultural areas are affected and are already applying restrictions on water use. Imminent proof of this is the state of the Po River, the largest and longest river in Italy used for drinking water, to nourish large tracts of agricultural land and to produce hydroelectric power, which is «at a minimum».

This situation has led several provinces and regions to ask the Italian government for help, approving the declaration of a state of emergency due to the drought. This measure is intended to control the current situation and to provide relief and assistance to the most affected population.

The current water crisis directly affects olive growing as we are on the eve of the irrigation period. The lack of infrastructures for water management, the drought and the heat waves that are accompanying this summer, leave us with a devastating panorama for the olive trees, a campaign with loss of quality and quantity of the Italian product is looming.

Italy is both a producer and consumer of olive oil and plays a very important role worldwide. There are different production models and market approaches, in addition to the fact that the olive tree is of great importance for the landscape and the environment, being emblematic of many Italian territories.

Within Europe, it is one of the countries that, in relative terms, exports more than 50% of its production. Italy has always been characterized by its international sales capacity, taking its olive oil culture to the ends of the earth. 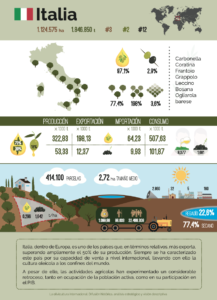 There are 2,860 mills, 22 olive oil mills, 5 refineries and 160 oil presses. The turnover of the olive oil sector in this country is 1,099.88 million euros, which translates into more than 22 million real working days.

Of the total animal and vegetable fats consumed in Italy, olive oil consumption accounts for 29%, or 500,000 tons of olive oil. 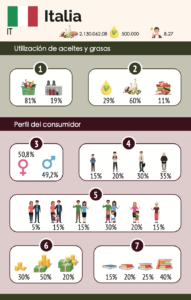 As for the consumer profile, it is consumed more by women than men, although not with much difference, standing respectively at 50.8% and 49.2%. With respect to age, the older the population is, the higher the percentage of olive oil consumers, with people between 50 and 65 years of age (30%) and those over 65 years of age (35%).

According to the type of olive oil, 54% consume extra virgin olive oil, followed by olive oil at 33%. On the other hand, only 1% consume olive pomace oil. In terms of packaging, the most olive oil is consumed in glass containers (97%), while consumption in PET (2%) and in cans (1%) is insignificant. The use of olive oil in Italy is predominantly for crude oil (40%), for cooking (30%), while it is more or less equal for grilling (16%) and frying food (14%).

Depending on the establishment where the oil is purchased, the purchase in supermarkets and other establishments such as oil mills, bottling plants, bars and other points of sale is equal to 30%.

Furthermore, in Italy, 63% of the people who consume olive oil do so within their own homes, the remaining 37% outside the home. Outside the home, the establishments where this consumption predominates are in collectivities (30%), followed by hotels, bars and restaurants (20%), and where it is least consumed is in the canning industry and the food processing industry (15%). 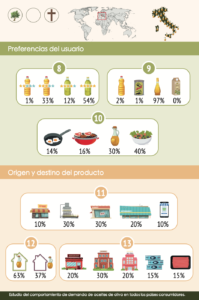