HOW DID THEY BEGIN PRODUCING OLIVE OIL ON NORFOLK ISLAND? 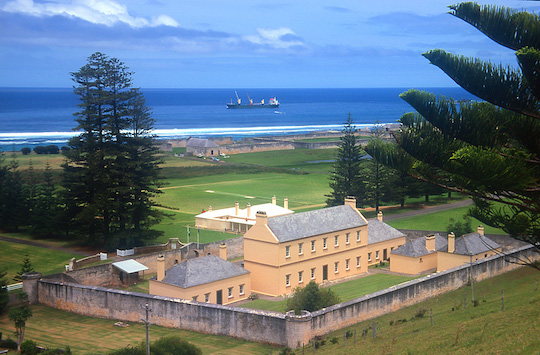 Norfolk Island is located in the Pacific Ocean, and is one of the furthest points from Spain on the globe as it is more than 18 thousand km away. It is located between Australia, New Zealand and New Caledonia, and forms an archipelago together with Philip Island and Nepean Island. All of them are part of the Commonwealth of Australia.

The island, which belongs to Australia, is a little less than 35 square kilometers in area. Here, slightly less than 1,800 people reside and the largest city it has is called Burnt Pine.

The island was a prison in itself from 1788 to 1825, and a high security prison from 1925 to 1947. At its peak, it reached almost 6,500 prisoners, who were transferred to Tasmania. Here is where they were taking the prisoners of the English Kingdom, and, instead of taking their lives or introducing them in English prisons, they were sent to live freely here.  However, they had little chance of leaving the island, because of the great distances that separate it from any other piece of land. The first Europeans who managed to arrive on solid ground here was Captain Cook in 1744. He was one of the fathers of oceanic cartography.

The olive tree arrived for the first time in Australia in 1805. This was thanks to John Macarthur, a man who established a gigantic nursery in Camden Park, which is southeast of Sydney. Here, there were more than 100 varieties, and they began to spread them throughout the island and adjacent islands, which at that time were mostly used for prisons. On the islands with olive trees, prisoners were able to work their crops and produce their own olive oil, starting in 1808.

Although these olive trees were introduced on the islands, an African variety of olive trees had arrived even earlier. In the 18th century, the wild African olive tree or Lapierre olive tree, arrived from Hawaii and South Africa. This is possibly due to the dumping of the waste from a ship that was docked on the island, which had olive pits among the other waste products it dumped. After this, they managed to take root and multiply on the island thanks to the birds who dispersed them throughout.

Therefore, at present on the island, there are both the European Olea (thanks to the introduction by John Macarthur, the first olive grower in Oceania. He is the man responsible for its boom, expansion and distribution throughout the archipelagos), and the African Olea. The latter probably arrived by transmission from the waste of a ship coming from South Africa or Hawaii, as was mentioned above previously.

Prior to Mr. Macarthur, however, the olive tree was introduced to Australia in 1750 by the gardener and settler George Suttor, although it was not registered. The first officially dated olive tree in the colony arrived in November 1800 in a collection of plants that was sent to New South Wales by Sir Joseph Banks. Among the trees that were sent, most of them died and the few that did survive were planted.

In 1805, another problem arose – the olive trees began to produce a large quantity of olives, and the locals did not know what to do with them. However, Edward Macarthur was able to come up with a solution to the problem. He was an army officer that was previously stationed in Andalusia, where he learned the design, operation and application of olive oil extraction, which had to be done using beam and screw presses. He designed one himself and sent his sister Elizabeth Macarthur the plans for its manufacturing. After this, they started to produce oil immediately, and in 1808, olive oil was already being produced in Australia, Saint Helena, and Norfolk Island. This was all due to the initiative of a French gardener and a soldier who was once stationed in Andalusia, a place where he learned the tricks of the olive oil trade.