India, 1.38 billion consumers of EVOO and now of Russian oil and gas 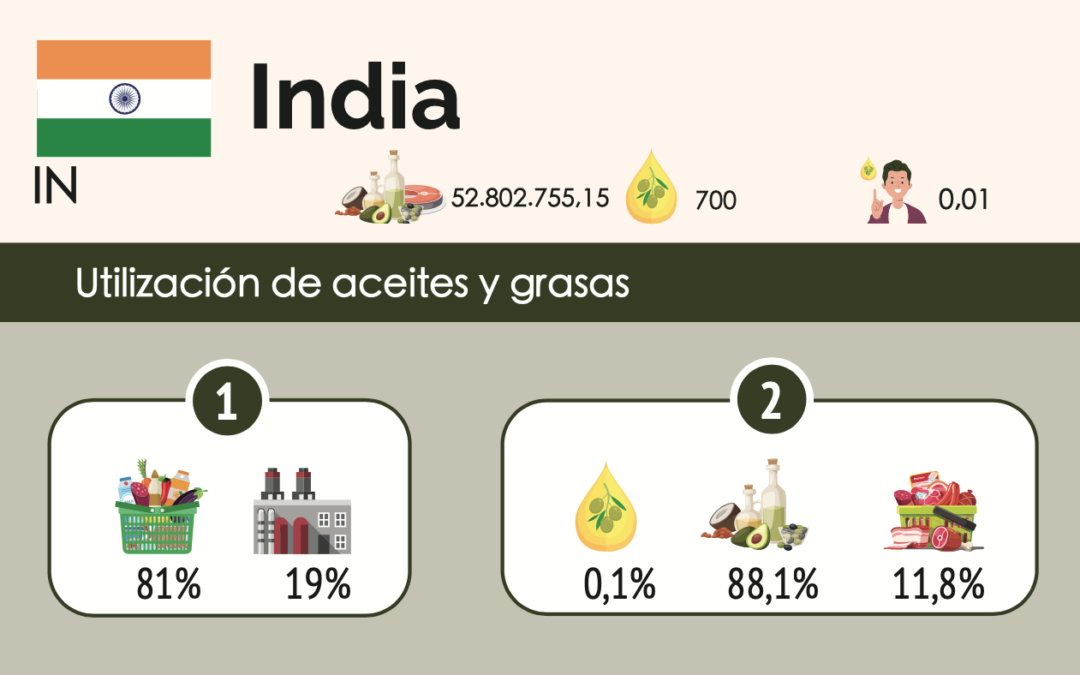 India is moving to the world stage because it and China are helping Russia to circumvent sanctions by buying oil at bargain prices. Russia has found new customers, including India, for its powerful oil and gas industry that are helping it to mitigate the heavy economic sanctions imposed by the West.

After the invasion of Ukraine, Russia replaced Saudi Arabia as the main supplier of oil to China.

It turned to India before the invasion, 1% of Russian oil exports were destined for the Asian giant, while in May, they rose to 18%. This has meant that, although Russia has seen a drop in its oil and gas export revenues, energy sector revenues are still sufficient to finance, among other things, the military effort represented by the invasion of Ukraine.

India, located in South Asia, has an area of 3,287,259 square kilometers, making it one of the largest countries in the world. India, with a population of 1,380,004,385 people, is one of the most populated countries in the world with 420 inhabitants per square kilometer. Its capital is New Delhi and its currency is the Indian Rupee. In 1990 the Indian market adopted olive oil as a food due to its healthy properties and began to grow slowly.

India is both a consumer and producer of oil, ranking fourth in vegetable oil consumption in the world, and importing around 5.4 million tons.

It currently has 20,000 hectares of olive groves. It ranks 30th in the world in terms of cultivated area, 37th in olive oil production and 36th in table olive production. Of the total production, 91% corresponds to olive oil and 9% to table olives. 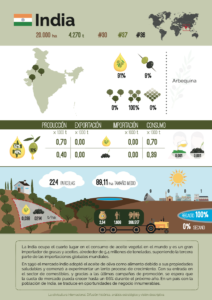 It produces 700 tons of olive oil that is not marketed to other countries. Of the total oil produced, 52% belongs to a higher quality oil (virgin or extra virgin), the remaining 48% belongs to a lower quality oil such as lampante olive oil. In addition, it produces 400 tons of table olives which are also not marketed to other countries.

There are 9 oil mills and 1 bottling plant. The turnover of the olive oil sector in this country is 2.64 million euros, which translates into 366 million real days.

About 0.01 kg of olive oil is consumed per person. The total consumption of olive oil stands at 0.01% with respect to the other types of oils present on the market in India. 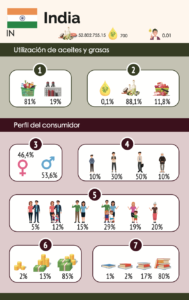 According to the type of container, consumption is higher in PET containers (80%) and in cans (15%). The main use for which olive oil is intended is raw, i.e. for seasoning with 90%, to a lesser extent than the previous one the use of olive oil for cooking and grilling with 5%. While they do not use anything for frying.

The main establishments where people in India buy olive oil are hypermarkets (60%), followed by supermarkets (20%), the Internet (12%), and almost nothing in traditional stores (8%). 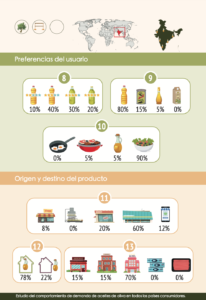 The majority of users in this country consume olive oil in their own homes (78%), and 22% do so outside their domestic environment. Outside the home, the establishments where olive oil is most consumed are hotels (70%), followed by bars and restaurants (15%), with the same percentage in public establishments.