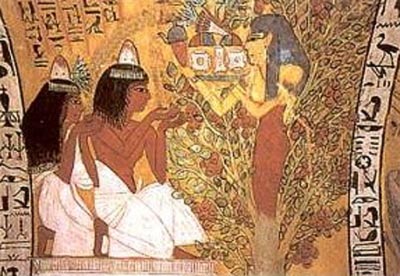 The Egyptian civilization, which originated on the banks of the Nile River and lasted more than 3000 years, is revered for many things:  the development of the writing system, its construction techniques, which led to the building of the monumental pyramids and temples, the improvement of the manufacturing of glass, topography, sailing. And last but not least, it is very well known for its irrigation canals and new agricultural production techniques it developed, which made it the main producer of grain in the ancient world. In fact, it was known as the ‘breadbasket’ of the ancient world.

Regarding agriculture, they mainly cultivated cereals, legumes, vegetables and fruits (melons, grapes, dates, figs). Later and due to the development of the trade they maintained with regions of the Mediterranean and North Africa, they introduced new fruits such as apples, olives and pomegranates.

For the Egyptians, the importance of olive trees was such that they believe that Isis, the wife of Osiris, passed this sacred tree on to man. She gave man the knowledge they needed in order to cultivate, harvest and eat the fruits from this mythical plant. The largest plantations were found in the fertile alluvial deposits of the Nile River.

In the hieroglyphs, there are numerous references to olive trees, their branches and their fruit. In the famous tomb of Tutankhamon, ornaments and crowns made with olive branches and other flowers were found. It was a sacred tree for the Egyptians, and olives were destined as food for the pharaohs in their transit to the afterlife. Olive wood was also used for the manufacturing of sarcophagi and various objects.

Due to the desertic conditions prevailing in Egypt, oil production was not stable, so it was necessary to resort to importing oils from Syria, Palestine and Greece. Above all, they reserved this oil for culinary, cosmetic and religious use. Olive olive had a great importance in the ancient Mediterranean world in general. As can be seen in the photo below, commercial transactions were documented on clay tablets. These are the so-called Mycenaean tablets, which are the first written representations that speak of olive oil. These tablets tell us about the importance of olive oil in the court of King Minos for the Cretan economy. They date to about 2,500 years before Christ.

Olive growing and olive oil production were a vital part of the economies of the different empires who ruled the ancient Mediterranean world, especially that of Egypt.