OLIVE TREES THROUGHOUT THE ENTIRE WORLD 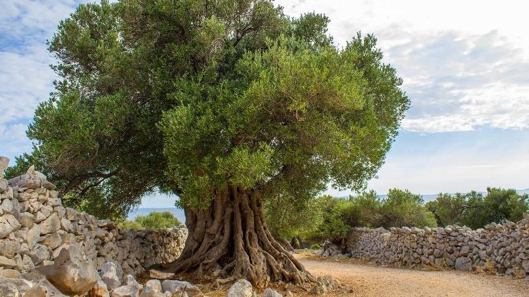 At the present, olive trees are present in 65 countries on the five continents in professional and industrial form, although we can also find them planted in a more informal way in the United Kingdom, Germany and Canada. Therefore, in one way or another, the more than 11.5 million hectares of olive groves that cover the planet are spread over all those corners that the orography, climate and soil account for. Starting now, we will take a look at some of those places, in which by their idiosyncrasy, circumstances or location makes them interesting, exotic and suggestive.

Firstly, we come to the island of St. Helena, (Australia). It is located in Moreton Bay, 5 km from the mouth of the Brisbane River and about 8 km northeast of Manly. The island contains166 hectares, and has a fascinating history.

Its most significant period was in 1867 when it served as a high security colonial prison for long term inmates. The prisoners had to grow and obtain their own food, selling products to buy goods and equipment. Surprisingly, one of their most popular products was extra the virgin olive oil obtained by themselves. It came from olive trees worked and harvested on the prison grounds. All the extra production was exported directly to Italy.

In the 1920s, the decision was made to transform this prison into a farm. In fact, there is a variety of olive tree called Helena that still preserves the memory of the prison. It is very similar to the Frantoio. Its oil, especially tasty for its texture and flavor, won the first international agricultural award in Australia. To this day, olive trees still bear fruit on the island, in memory of those captive olive growers.

Now we are going to move on to the second place – Maui, (United States), is an island in the Hawaiian Island archipelago. It is the second-largest island in the archipelago with a total surface of 1880 square km and it has a population of 120 thousand inhabitants. It is known for the fertility of its lands.

One wouldn’t think it was easy to find olive trees in a subtropical climate destined to avocados, papayas and other fruits of that nature. One would think that due to the Hawaiian climate, which is very hot and humid, would damage the olive trees. Nevertheless, there is a strip goes from Upper Olinda to Kamaole in Keokea, and on the island of Maui the situation seems perfect. Since 2008, more than 10 thousand olive trees with a single trunk of the varieties arbosana, cerasuola, and picholine have been planted. They have 6 by 3 planting frames, some are rainfed and others are irrigated. In 2015, the first extra virgin olive oils were obtained from Hawaii. They are green, spicy, fruity and have a robust and complex flavor.

The complexity and robustness of these oils is due, above all, to
a dry or semi-desert climate, volcanic soils and an altitude ranging from 500 to 1,100 meters above sea level, making these Hawaiian extra virgin olive oils a true culinary pleasure.

Salt Spring (Canada) is one of the Gulf Islands in the Strait of Georgia, between continental British Columbia and Vancouver Island.

Since 2001, with several failures, and with several tests of different varieties, Frantoio and Leccino have been cultivated. They are dedicated, in principle, to table olives, but gradually, step by step, the first plantation for the elaboration of olive oil arose. It was initially  composed of1.000 olive trees and about 30 hectares.

Currently, this farm has 2,500 plants, and an area of 75 hectares, with its own oil mill. This is located above the 46th parallel, exactly at 48º47″, being the most northern one on the planet, exceeding the «46º barrier.» It is only located a little more, 3 thousand km from Alaska.

This is the only place in Canada with a Mediterranean climate. The unique environment, which blesses Salt Spring with more sunshine and less rain than the surrounding areas, produces an extra virgin olive oil with a touch of tomato flavor, smell of fig tree and freshly cut green grass, with a powerful texture, making it truly one of the most unique in the world.

We will now go on to Shodoshima, (Japan). It is an island in the interior sea of Japan which has an area of 154 square km, and about 35 thousand people live there. The climate is warm and temperate with significant rainfall. Even in the driest month it usually rains. Since it has a Mediterranean style humidity and climate, one of its nicknames is the Island of the Olive tree.

The olive tree first arrived in Shodoshima from the United States, and then from Europe in the first decade of 1900. This is why there are various varieties, with different origins (Arbequina, Frontoio, Nevadillo, Manzanillo, Mission and Lucca). The promoter of the first farms was the Ministry of Agriculture and Trade of Japan, and he had the aim of producing his own extra virgin olive oil. The island’s Mediterranean climate gives oils sweet flavors, with faint hints of spring garden smells and taste, reminiscent of immature almonds, and a firmness on the palate that makes them quite exceptional.

The island has a park devoted entirely to olives, olives and olive oil.

The Island Mauritius is a sovereign country of about 180 kilometers of coast, located in the Indian Ocean and with something more than a million inhabitants residing in their paradisiacal surroundings.  One of the most recognized wild and exotic places is The Bras d’Eau reserve, a site on the east coast of just under 500 hectares. It is an authentic indigenous forest covered with wild olive trees (acebuches) and ebony trees, sporadically accompanied by exotic species, such as eucalyptus, araucarias, etc. The island was an obligatory stop that led to olive trees, an African subspecies, towards Oceania and Asia. Already in the 15th century, the inhabitants of the island used the oil extracted from the fruit of these millenary olive trees as an invaluable merchandise to be exchanged with visitors, tourists, passers-by, sailors, and a long etcetera of people who visited the island due to its geographical location and strategic position with respect to international maritime routes. The EVOO, even though it is made on the island using traditional, almost rudimentary methods, is aromatic, with wild and exotic reminiscences of mint, thyme, red fruits, spiciness, and some bitter notes, which make it unique, and quite exquisite.

Oxney Island (United Kingdom) is located in the south of the country in the county of Kent. It’s a site that takes its name from the sixteenth century, and over time has become a simple nickname. As it is now a promontory on the mainland, it is no longer surrounded by water. In this environment, which is one of the driest and warmest places in the United Kingdom, the Davy family, after enjoying their honeymoon in Italy, made the dream come true in 2002: they planted 2 hectares of olive groves, amounting to about 200 olive trees in total. The trees are mainly from the Frantoio and Leccino varieties, and make for some tasty table olives, and an olive oil of harmonious balance. The oil has touches of cinnamon and fresh grass, and is conferred by the unique breeze from the North Sea and the Atlantic Ocean.

The region of the Rheinland (Germany) is divided on both sides of the Rhine. Its Nordic climate is mitigated by the effect of the course of that river. Since 2005, by the work and grace of the Becker Brothers, the owners of the Stommelner Heinz Becker nursery, some 220 olive trees have formed part of the natural environment. They are rainfed, have a single trunk and a planting frame of 3.5 x 4 m. They are distributed throughout around 1.5 hectares, and almost all of them are of the Leccino variety from Italy. This is yet again another example of olive trees taking root not only in their common habitat, but also in those comfort areas, and exclusive microclimates where nature permits them to thrive. These trees, Bay of Cologne, produce an extraordinarily intense, fruity olive oil, with generous reminiscences of artichoke, alloza, and immature tomato.