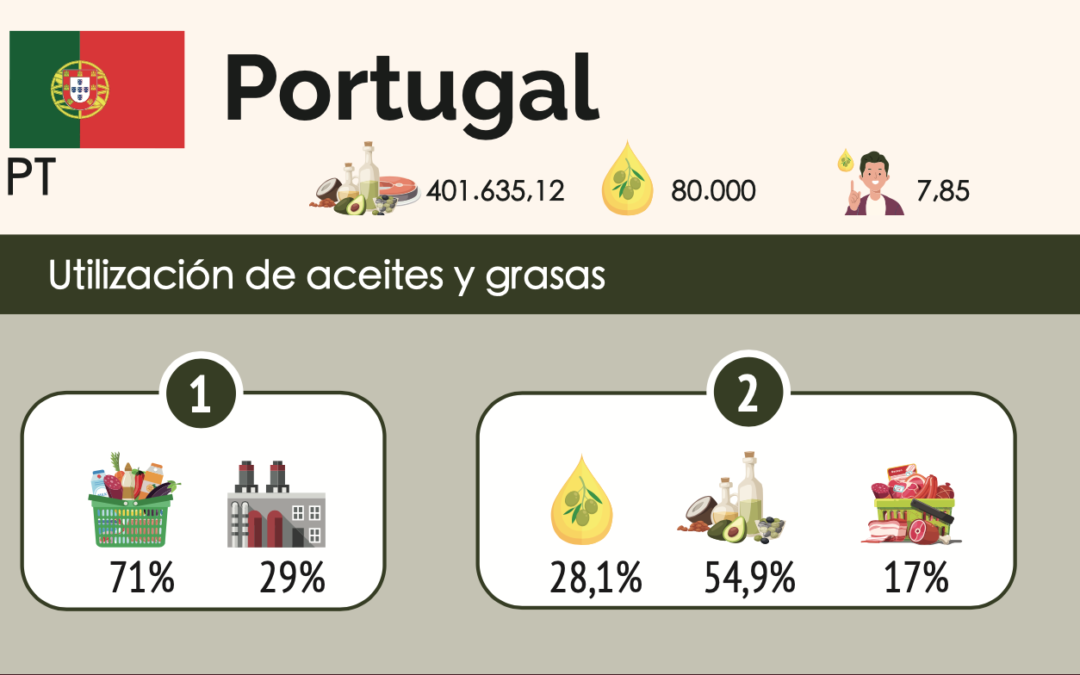 Portugal is one of the ten countries with the largest area of olive groves. It ranks ninth, with 361,483 hectares of olive groves. It represents 3% of the world’s olive grove area. The suitability of the soil and climatic conditions for this crop have made olive oil an ancestral part of the Portuguese people’s cooking habits.

Olive cultivation in Portugal has been present since the Bronze Age, playing an important role in Portuguese agriculture and cultural tradition. But it was in the 16th century when the consumption of olive oil increased significantly. From then on, olive growing became widespread in Portugal. The Portuguese intervened in the introduction of olive cultivation in other countries, first in Uruguay at the end of the 17th century and in the south of Brazil around 1800.

The main geographical areas where olive plantations are located are: Alentejo (50%), Tras-os-Montes (23%), Beira Interior (14%) and Ribatejo e Oeste (7.5%). The rest are located in the Algarve, Beira Litoral and Entre Douro e Minho.

There are about 118,450 olive grove plots in Portugal. They are characterized by high density plantations, with an average size of 3.05 hectares. A lot of people are beginning to own plantations of their own. The highest density holdings are located in the Alentejo region. However, regions such as the Algarve or Entre Douro-e-Minho are characterized by low-density olive grove plots. 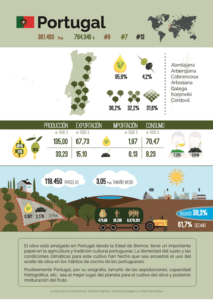 The olive tree varieties that predominate in Portugal are: Alentejana, Arbequina, Arbosana, Cobrançosa, Galega and Koroneiki and Cordovil.

Portugal ranks seventh and thirteenth as a producer of olive oil and table olives respectively. It produces 784,340 tons of olives annually, of which 33,230 tons (4.24%) is destined to table olives. Most of the production is exported. The 97% of the total production is destined to the production of olive oil, obtaining 135,000 tons of olive oil and an average yield of 18%. 72% of the oil produced has the category of Extra Virgin and Virgin Olive Oil and the remaining 28% is Lampante Oil.

Of the total oil produced, 67,270 tons supply domestic consumption. This amounts to a per capita consumption of 7.2 litres of oil per person per year. The rest of the production is exported mainly to Brazil and Spain, which account for 70% of Portuguese exports. And 30% is exported to Italy, the United States, Angola and France. Exports are mainly sent to Spain and Italy in bulk.

It is also an importer of olive oil, mainly from Spain and Morocco.

Portuguese olive plantations have a productivity of 2.1 tons of olive per hectare. Its plots produce 391 kg/ha of oil, making it one of the four most productive countries.

Olive oil consumption among the population living in Portugal represents 28.1%. Differentiating this consumption between men and women, men consume a higher proportion of olive oil (52.7%). The age range in which people consume more olive oil than any other is adults over 65 years old (35%), followed by adults between 34 and 49 years old (26%). 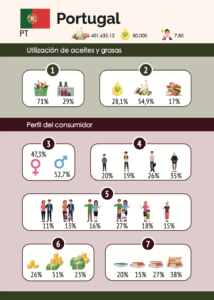 As for the consumption of olive oil according to the family structure, middle-aged families with children predominate, amounting to a whopping 27% of consumption.

With regard to the percentage of olive oil consumption according to the level of education of the individuals, 38% of people with university studies predominate. This higher proportion in this range of people may be due to the fact that they have a high purchasing power, so they are willing to pay more money for a product that has greater health benefits.

A very significant number of Portuguese users prefer extra virgin olive oil over other varieties of olive oil, standing at 54%. Olive oil has a good positioning compared to other oils. It is the priority for use in kitchens as well as for raw consumption, with 30% and 40% respectively. 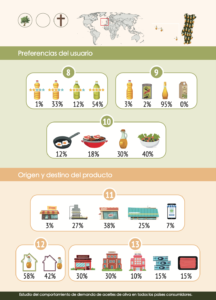 In the last 10 years, the country has doubled its production without increasing the cultivated area, as a result of the modernisation of the sector. As a result, olive groves in Portugal are very competitive due to the transformation of the olive grove into modern plantations that allow lower production costs. This has benefited the whole country directly and indirectly and has contributed to an increase in exports and wealth creation.

As a result of the modernization of the sector, it produces an olive oil of excellent quality since 97% of the olive oils produced are virgin and extra virgin.

Portugal’s geographical position in the Mediterranean Basin gives it exceptional characteristics for olive growing due to its orography, climate, the size of the farms, great availability of water, as well as the country’s economic and political stability. All these factors make Portugal probably the best place in the world for olive growing and olive oil production.