REFLECTING ON THE PAST FOR INSPIRATION… JOSE ALBERTO CORBELLA 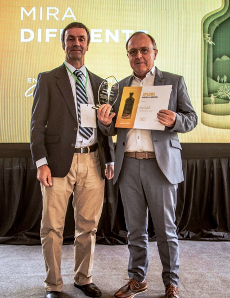 In the early days of 1973, and due to the pressure generated by the news of a possible closure of universities for political reasons, and by the incipient labor pains of an early birth of the Dirty War in Argentina, I was impelled to give a last push to the completion of my university career.

Already received and with an uncertain outlook from the point of view of work, I started different activities related to what I had selected as a profession. However, there wasn’t any evidence of a continuity at that time that would give me some peace of mind and future projection.

Suddenly, a proposal came from a former teacher of Industrial Processes (Eng. Orlando Arpesella Q.E.P.D) asking me if I was interested in working with a German centrifuge company called Westfalia Separator.

This simple proposal was the start of my future career as I started as an agent for the North of Argentina, and my duties were basically to attend to the citrus, dairy and sugar market. Then another proposal to stay 15 days per month in Buenos Aires and the other 15 days touring the country working with all sectors came. These sectors included vegetable oils, rendering, starches and iso syrups, chemistry, fruit and wine juices, yeast and alcohol, etc.

I only stumbled upon the olive sector when I visited the Traslasierra area in Córdoba and some old oil mills in the provinces of Mendoza and San Juan.

Since the market was mainly in the central area of the country, a third proposal came about that could be paraphrased as such: «Then come with your family to live in Buenos Aires and work full-time for Westfalia Separator Argentina S.A.»

So we did it – we sold our house in Tucumán and bought one in Martínez, in the Province of Buenos Aires.

Our nomadic life did not end there, since after four years of stay in Buenos Aires, the fifth proposal arrived and included moving: «To open a branch in Chile.»

In September 1990, I started to search for schools and housing alongside my wife.

As there was no cultural agreement between the two neighbouring Spanish-speaking countries, my children had to study French only once in order to take the entrance exam to the Chilean school system.

Then, in 1992, we opened the Peruvian branch, which was provoked by the fishing boom in both countries. However,  we had to close it in 1997 due to the difficulties in this changing market, leaving our former employees as agents.

My career in the Group ended with my retirement on 31-07-2017 having reached the position of Regional Manager for Latin America of Gea Westfalia Separator GmbH.

The direct contact with the sector in Chile occurred at the beginning of the new century. It is a sector with roots in the colonial era with varieties that are mainly table olive varieties in the north of the country: Azapa Valley in Arica and in the area of Tarapacá.

Back in 2001, due to an interregnum with Argentina because of the departure of its German manager, we closed the San Juan de los Olivos oil mill in the province of San Juan with the Roemmers pharmaceutical group and then the Promas oil mill in the province of La Rioja with the La Serenísima Dairy Company. These were the first facilities in Argentina to respond to a 10-year tax deferral plan promoted by the government.

In 2002 in Chile, we took the first order in Chile in the town of Los Maquis-Pelequén-VI Region with the firm Agroindustrial Valle Arriba.

The «herd effect» (so current) produced a cascade of new investments and investors for this activity.

Economic and industrial groups from other areas set their sights on this new activity.

Perhaps this is where the big difference lies between the traditional producers, mostly farmers, and the new players with broader financial backs and their own engineering support or foreign consultants.

The task was daunting since it was not only the production line that needed to be addressed, but also the distribution of equipment, water qualities, architecture, size of storage tanks, final waste disposal, etc.

We set up a technical support group with draftsmen and designers that our competitors did not have and we gave our customers more for the same.

This consolidated us as leaders and it was a sector that I worked on directly, attending all the explanation meetings, kick off meetings, etc.

We were able to install 18 mills in Chile with capacities ranging from 20 to 600 Ton/d of milling, even with local manufacturing of some equipment.

Our experience transcended borders and we sold equipment to neighboring countries.

The goal was the profitable production of a quality product and we achieved it.

How do I see the industry today?

The new management of Grupo Gea considered this sector as a business of doubtful profitability and supported it only to maintain the productive occupation at an adequate level.

The entire team assembled to serve the sector locally was dismembered and the disappointment of our customers turned into a resistance to everything that the brand that we worked so hard to consolidate meant.

This was a propitious ground for the irruption of the competition in a field already permeable to these technical advances. This was a situation that was replicated in the wine sector, a market much more resistant to include centrifuges in its production line. Those who invested their time and replaced us did so without great investment, and achieved something by following the path that had already been pathed previously by others.

Today the sector is depressed by prices, large stocks due to the fall in consumption and prolonged drought that seems to be being reversed this year.

I do not see new investments in new mills in the medium term, possible projects will be limited to maintenance or replacement of equipment.

I once heard a example of a great Chilean expression about the industry: «Olive oil is a fight for big dogs.” The problem is that many of these dogs are somewhat tired of such low profitability in the business.

I am very satisfied with what has been done and it was an honor to have been recognized by ChileOliva in 2018.