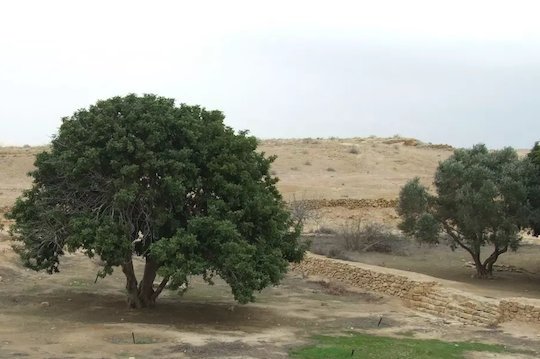 The Negev desert is located in the south of Israel. Its shape resembles that of an inverted triangle, whose vertex rests on the Red Sea coast. It is the largest non-meteoric crateric structure on Earth.

Being a desert, it is considered inhospitable, since rainfall is scarce and temperatures reach over 50 ° C. This is why many civilizations have not considered it viable to explore.

Despite this inhospitality, there is evidence that this desert was occupied during the Nabatean period (3rd to 1st century BC). The Nabateans settled in the areas near the commercial routes of the time from India, Arabia and the Dead Sea. Proof of this is the ancient city of Shivta, where the spice route ended, which was conquered by the Romans. Later, the Byzantines created a sophisticated, flourishing place, as they developed water storage and distribution systems through the construction of canals and dams. They took advantage of the steep runoff through the stony hills and terraces that favored the development of agriculture. Therefore, Shivta is considered a colony of farmers who managed to blossom in the heart of the arid Negev desert.

Witness and proof of this flourishing civilization are the hundreds of olive trees that still exist there today around the archaeological remains of this arid place. These olive trees remind us of the paradise that once existed here thousands of years back. It is a cultural remnant of ancient agriculture.  Many of these olive trees, which were abandoned centuries ago, have survived despite the almost inhabitable conditions they find themselves in.

A group of archaeologists, scientists and researchers from the University of Tel Aviv have devised a rescue plan to save these legendary olive trees.In order to do this, they are restoring the canals and irrigation systems that were put in place in the Byzantine Era. This, along with the love which this project was born out of, will save these ancient trees that were able to withstand so much throughout their history in this extremely arid place.