THE LEXUS AND THE OLIVE TREE: A BOOK THAT COMPARES GLOBALIZATION WITH MILENARY CULTURE AND IDENTITY 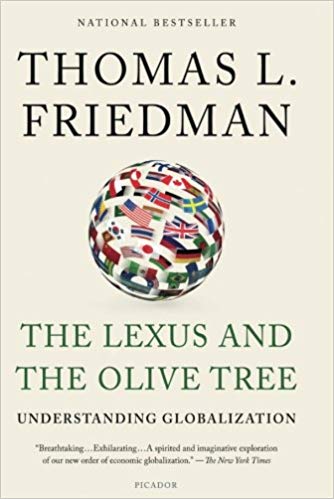 Author Thomas L. Friedman is a columnist for Foreign Affairs at the New York Times.  He is winner of two Pulitzer Prizes for his report as head of the Times office in Beirut and Jerusalem of his first book, From Beirut to Jerusalem. He won the National Book Prize in 1988 for this book. He has continued with his success with his work The Lexus and the Olive Tree, which shines a light on the big picture of the postmodern economy we find ourselves in.

In order to write this book, Thomas traveled the four corners of the world, interviewing people from all walks of life including: Brazilian peasants in the Amazon Rainforest, new entrepreneurs in Indonesia, Islamic students in Tehran and financial wizards on Wall Street, and in Silicon Valley. The author did all this in order to better understand globalization. He defines it not only as a phenomenon and a passing trend, but also as an international system that replaced the Cold War system. He states that it is integration of capital, technology and information across national borders. This creates a single global market and, to some extent, a global village in a certain way.

Lexus is the high-end car brand for Toyota, and olive trees are scattered throughout much of the planet – in 64 countries covering 11.5 million hectares in total. Lexus refers to a universal desire in things such as cars. This represents globalization. On the other hand, olive trees represent the opposite – a sign of love, which is sincere and involves identity. They represent deep cultural and local connections. In highlighting both the Lexus and the olive tree, a very emotional path of the world emerges.  On the one hand, mergers of the big companies grow at a rapid pace and on the other, markets of artisan entrepreneurs are developing as well.

Friedman provides us with a new way of looking at our system, showing the conflict between the Lexus and the olive tree. He illustrates the tension that currently exists between globalization and culture, geography and tradition. In a response to this inevitable situation, he explains what we steps we can follow in order to provide balance to the system.

This work undoubtedly is an important read for those who are worried about the overall health of our lifestyle in an ever-evolving global economy.