THE USA IS THE WORLD’S LARGEST CONSUMER OF OLIVE OIL 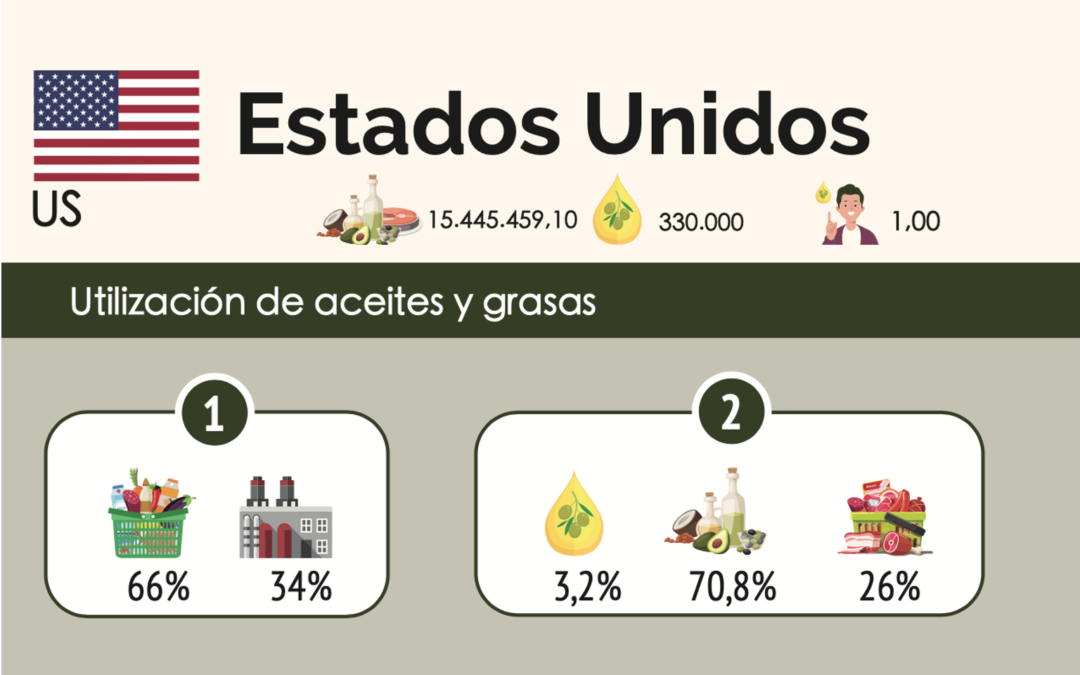 There are 198 olive oil consuming countries in the world, of which only 66 are producers.

The consuming countries are classified into three major groups: a. Large producers. B. Small producers; and c. Non-producers.

Within the category of small producer countries, the USA and Brazil stand out. The USA is the largest consumer of olive oil in the world within its category. 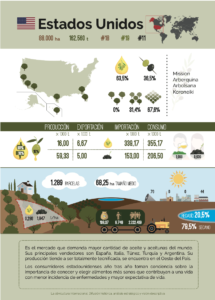 The United States ranks 18th in terms of the area of olive groves cultivated in relation to the other producing countries, which currently amount to 66. It is the second largest producer in the Americas, preceded by Argentina. It represents 0.75% of the world olive grove area, with 88,000 hectares occupied by this crop.

The main olive grove plantations are located on the southwest coast of the country, mainly in the valleys of California where a Mediterranean climate is present.

The olive groves are distributed over 1,289 plots, with an average area per plot of 68.25 ha. The main varieties grown are Mission, Arbequina, Arbosana and Koroneiki.

63.5% of the olive grove area is used for oil production, while the remaining 36.5% is used for table olives.

As for the productivity of the plantations, 1.847 tons of table olives are produced per hectare and around 0.286 tons of olive oil are obtained per hectare with an average yield of 16%.

In terms of consumption, the United States is the market with the highest demand for olive oil and table olives in the world. It is the third largest consumer of olive oils, preceded by Italy and Spain. Its main sellers are Spain, Italy, Tunisia, Turkey and Argentina, from which it imports 340,000 tonnes of olive oil on average.

Two thirds of the olive oil consumed is destined for human consumption and the remaining third for industrial use.

The biggest consumers are people with a secondary or university education (79%), middle income and over 49 years old. The biggest consumers are those over 65 years old, who represent 42% of the total amount of olive oils consumed, followed by the age group between 50 and 65 years old (35%), mostly men (51%). Middle-aged families with children are the ones who consume more olive oil, representing 28% of the total consumption compared to young couples without children who consume 9%. 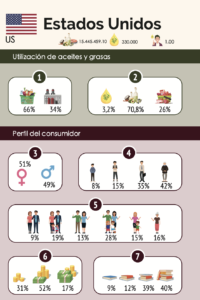 The type of oil most consumed by Americans is olive oil (46%), followed by extra virgin olive oil (36%). Olive oil for Americans is a gourmet product, which is why 67% of the olive oil consumed is raw and the remaining 33% is used for frying, grilling or cooking.

The places where they buy them are supermarkets and hypermarkets (69%), 22% of the purchases of olive oil are made directly in the oil mill, bottling plants or other points of sale. Internet sales do not represent a high percentage, only 6% of olive oil purchases are made by this means.

Year after year, American consumers are becoming more aware of the importance of knowing and choosing healthier foods that contribute to a life with a lower in 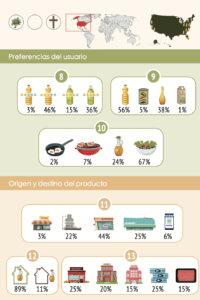