WHY DOES THE ERITREAN FLAG HAVE OLIVE BRANCHES ON IT? 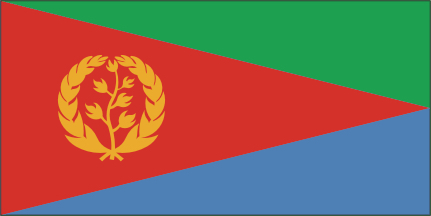 The current Eritrean flag, which has been used since 1993, is a combination of its Liberation Army and the former Eritrean flag from 1950.

The two outer branches on the Eritrean flag are obviously olive branches (UN – Eritrea in 1950 – Eritrea 1993) On the other hand, little is known about the central branch containing fork leaves. People are not sure what It represents exactly.

In the beginning, a central olive branch and two surrounding branches were proposed, but finally the emblem was slightly modified, giving us the flag we know today. Due to the lack of documentation about the modification of the flag and its current appearance, the central branch is not considered to be that of an olive tree.

In Eritrea, the 64th country on the list of olive oil producing countries from the manual International Olive Growing (Vilar 2018), olive cultivation dates back several centuries. There the plantations are traditional and have rainfed regimes, with disorderly olive trees and small farms. The main variety in the country is the offspring of Olea Africana. This variety has great tolerance to droughts and to the intense heat that exists in Eritrea.

The harvest of more than 10,000 ha in the country was completed a few days ago. Olive oil production is destined for domestic use solely. Eritrea cannot fulfill the internal demand that exists, therefore it imports to satisfy demand.

The Eritrean Government has allocated large funds for the conversion of irrigated areas of a large part of its arable land. In addition, through several programs, including educational ones, the government has made great efforts to repopulate its territory. It hopes olive trees can be a big part of the revitalization. Eritrea is betting heavily on olive trees for their resistance and economic profitability, both for the oil they produce and for other by-products, such as livestock feed. Only time will tell if they have been successful or not.