The great importance that olive oil holds in Spain is almost immeasurable as it is has been a fundamental part of Spanish culture and the Spanish economy for millenia. This is especially true in southern Spain, which is now, and has been for some time, the biggest producer of olive oil worldwide.

This grand legacy can be attributed mainly to the Roman Empire. There were cultivated olive trees in Spain before the Romans, however, shortly after the Romans conquered Hispania an agricultural revolution of an enormous scale took place.

Anyone who had lived in Spain, especially in Hispania Baetica (currently Andalusia), would have seen the countryside transform completely. The Roman Empire ran on olive oil, and Rome invested heavily in the Baetica in order to supply the demand of the liquid gold that the empire depended on.

To put in perspective how much was produced in Spain, 7 million liters are said to have been sent to Rome every year. This turned Spain into the olive oil hub and distribution center for the entire empire, much like it remains today. People made a lot of money, and from this, a plethora of jobs were created ranging from growers, pickers, pressers, packers, transporters, distributors, and the people who made the containers (also known as amphora) to put them in.

Since Spain was, and still is, an oil economy, it needed infrastructure. It needed warehouses, bottling plants and ports. One of the main transport hubs at the time could be found in Hispalis, what we now know as Seville. 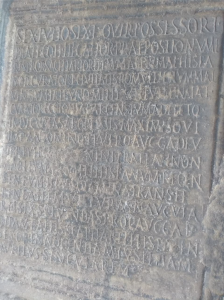 A small remnant of this important olive oil hub exists in an extremely touristy and popular place, although you probably would never recognize it. On the corner of The Giralda, which is a Moorish tower built centuries after the Romans, you can find a dedicatory plaque to a Roman official named Sextus Iulius Possessor. The plaque tells the tale of Possessor’s career and how it started as an agent of the empire based in Rome who ensured that all the olive oil from Spain and North Africa arrived safely to Rome. After this stint, Possessor was sent to the Baetica, specifically to Hispalis, where he started the job of procurator (or overseer) on the riverbanks of the Baetis river, which is now known as the Guadalquivir river. His job consisted of being the safe pair of hands that made sure everything was running smoothly along the river with the olive trade.

So, the next time you’re in Seville walking next to The Giralda, squat down and take a picture with your cell phone of the cornerstone that gives a glimpse of Spain’s olive oil legacy that it inherited from the Romans, a legacy it still holds today. It will be a nice reminder that, although it seems we are so technologically advanced and disconnected from the past, our worlds and our economies still have some fundamental things in common.