AN 11TH CENTURY OLIVE OIL MILL SCULPTED OUT OF ROCK 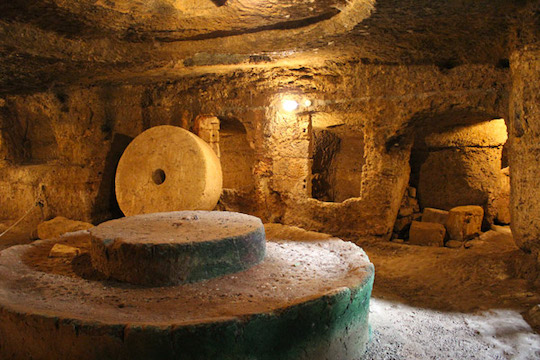 The Apulia region can be found on the coast of the Adriatic Sea and the Ionian Sea of ​​the Mediterranean Sea. This region corresponds to the heel of the boot of the Italian peninsula. There is treasure with great cultural and historical significance in one of the provinces of this region, Lecce.  This is the Abbey of Santa María di Cerriate, located in the northern part of the province. It is surrounded by a spectacular and diverse landscape composed of olive groves, fruit trees, orchards, cereal fields and forests of holm oaks, cork oaks and ash trees.

There is a legend about this abbey. It says that the abbey was founded by the Norman king Tancred of Hauteville after having a vision of the Virgin Mary following a deer inside of a cave where EVOO was being made. From this, the abbey got the name Cerrate. Historically speaking, there is a document from the beginning of the XII century that refers to the abbey as a residence for Basilian and Greek monks. They were followers of Saint Basil the Great, the man  who made refuge in Salento to escape iconoclast persecutions from Byzantium. The construction of this abbey began at the end of the 11th century under the order  of Tancred of Hauteville.

Built near the Roman highway that connected Brindisi with Lecce and Otranto, the abbey expanded and grew to become one of the most important monastic centers in southern Italy. The complex had big rooms decorated with Byzantine frescoes and numerous works of Romanesque art. There was also a library, a scriptorium, a refectory, a church and housing for the peasants who worked the land.

At the beginning, the abbey was perfectly organized and functioned very well. It enjoyed a high amount of profits, thanks to the farming that the peasants had partaken in. There was a great crop diversity in the abbey including olive trees, cereals, fruit trees and gardens. Also, there were wells that were used for storing water for the crops and gardens. There were mills for cereals, stables for animals, a big oven for cooking artisanal products made by the monks. But, most importantly, there were two underground olive oil mills in the interior so that the monks could make the prized item for the abbey – EVOO. The monks must have had a great appreciation and expertise for making EVOO, because they obtained an olive oil that was renowned throughout numerous parts of the Italian peninsula.

It is believed that the mills were sculpted under the ground to shelter and protect what the monks treasured more than anything else – EVOO. Unfortunately, in 1711, it was sacked by Turkish pirates. However, thanks to the strategic location of the olive oil mill, it didn’t suffer any great damage. Today you can even visit it and see the unique site of Romanesque Byzantine ruins that surround it.