The Mount of Olives is one of the holiest sites in all of the Holy Land. Besides being one of the most frequented places where Jesus performed his prayers, it is also a place dedicated to solidarity.

Here we can find the Augusta Victoria Hospital. Although it was initially designed as a guest house for German pilgrims, it became the headquarters of the Turkish army later on. After this, it served as a government house for the British mandate of Palestine. It was after the outbreak of World War II when the Augusta Victoria campus took the humanitarian role that it has today.

East Jerusalem lacked hospitals, which is why the LWF was requested at the time.  The Lutheran World Federation managed the hospital to respond to the humanitarian assistance that was demanded. They feared that the property was going to be confiscated by Israel. Therefore, the German owner, the Kaiserin Augusta Victoria Foundation (KAVF) created Augusta Victoria Hospital and the 46 acres surrounding the LWF. This hospital, also known as the AVH, is the largest hospital in the area and plays a fundamental role in the primary care of Palestinian refugees.

Even today, Augusta Victoria Hospital continues to provide its services and its campus serves as a center for diaconal activities.

All of this assistance is partly due to one of the projects that is carried out in the immediate vicinity of the hospital. In the surrounding area of ​​the hospital, there are 800 olive trees cultivated on the Mount of Olives. As if it were a blessing by Christ himself, there is an EVOO which is extracted from its fruits. It provides income to compensate for hospital costs, in addition to providing patients with their own oil. 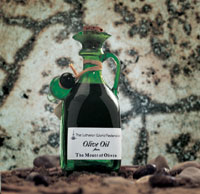 Cultivated under an organic production system, workers and volunteers reap the fruits of these 800 olive trees, which is of the Barnea variety. This is dry land, so the cultivation system is done in a traditional fashion, due to the millenary age of the trees. The olive harvest lasts up to six weeks, and that there are hundreds of volunteers who contribute to this act of solidarity.

The EVOO obtained from the harvest is used in the kitchen of the Hospital itself, so that all hospitalized patients can benefit from the great qualities given by the oil. The rest of the elaborated EVOO is used as an eternal sign of thanks. It is given as a gift to all those who allow this healthy, generous project go ahead.

This shows that wherever the Olive Tree and EVOO is present, prosperity becomes a reality.