CHARLEMAGNE, OLIVE TREES AND THE ABBEY OF SANT’ANTIMO WERE ALL A TRIBUTE TO EVOO 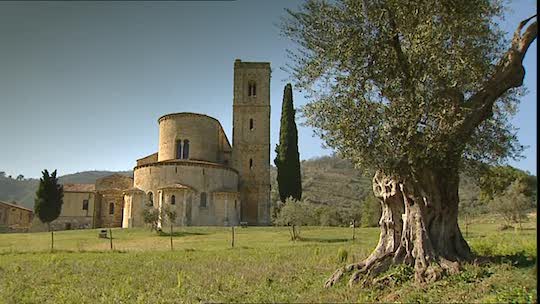 In one of his innumerable displacements, in search of expanding, uniting and defending his extensive empire, Charlemagne returned from Rome to Europe, passing through the «Via Francigena». In the heart of Tuscany, he realized that his army had gotten a strange virus that made them ill without remedy.

During the night, he had a vision: An Angel told him to distribute a concoction made with spices from the area, local herbs, olive leaves and extra virgin olive oil to his men. Following his instructions, he prepared this strange infusion for his army, which ended up healing them on the very same day. After this, they were ready to continue fighting for the creation of Europe.

In gratification, we find the Abbey of Sant’Antimo, founded in the year 781 by Charlemagne. Not surprisingly, one of the rooms of the monastery is a small room where an EVOO prepared with early-harvested fruits from the heart of Tuscany is extracted, which makes visitors and parishioners delirious with joy.

The devotion and tribute both to the abbey and to the olive oil that Charlemagne processed, was continued throughout the Carolingian dynasty. This was given more power over the years. With the Carolingian impulse, the community began its period of apogee. The Abbot of Sant’Antimo was given the title of Count Palatine (count and counselor of the Holy Roman Empire). The examination of the imperial letters, among which we find one from Enrique III in the year 1051 and other papal ones, attest that numerous territories and churches were put in the jurisdiction of the abbey. There were 96 total which included castles, lands, «poderi» and mills. Furthermore, there were 85 which included monasteries, churches, parishes and hospitals from the «grossetano» to the «pisoiese» going from Siena to Florence. 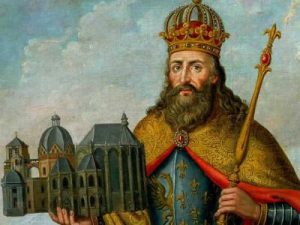 Charlemagne was the successor to the throne of King Pepin the Short. He expanded the various Frankish kingdoms into an empire, to which he incorporated much of Western and Central Europe. He conquered Italy and was crowned Emperor Augustus by Pope Leo III on December 25, 800 in Rome.

For all his exploits and the constant struggle he partook in to expand and unite the territories of the old continent, this conqueror and lover of EVOO is referred to today as the father of Europe.