EVOO WAS MADE IN MOST MONASTERIES IN EGYPT 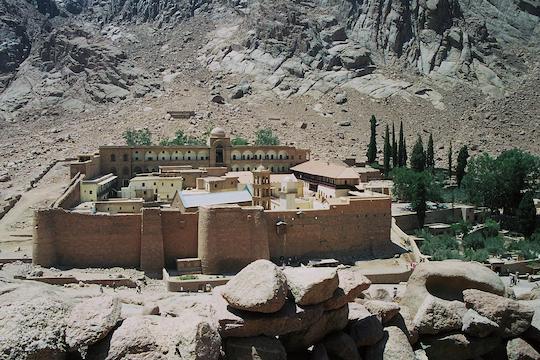 Panopolis was an Egyptian city, the capital of one of the nomos of Upper Egypt. Located in the south of the country, it extends from the vicinity of Cairo to the first waterfall of the Nile River. It is located along a plain, which thanks to the alluvium of the Nile River, gave the region a fertile land, producing food in great quantities which made it an ideal enclave for the transit of trade routes. Proof of this is the discovery of amphorae of wine from Canaan. This wealth was reflected in its rulers and its inhabitants who were participants in a wealthy social life.

During the IV and V centuries, it was an important Coptic enclave, where the Christian faith developed. At that time, Panopolis was called Shim and was an important seat for bishops, where many temples and monasteries were built for worship.

One of the most important monasteries built at that time was the White Monastery of Ajmin or Monastery of San Shenoute, which was built thanks to the stones that decorated the ancient Egyptian temples in the area. The monastery was founded by Shenoute, an Egyptian religious figure of early Christianity and writer. He established something inside the monastery. He ordered that besides the prayer and the adoration, the monks were to be dedicated to other types of traditional trades such as cabinetmaking, tailoring, binding and writing. He did this with the noble intention of employing the monks in their ancient professions. Such activities made the monastery a vast self-sufficient complex, occupying some 52km2 of land.

The monastery cultivated various crops, orchards, cereals, fruit trees, vineyards and olive trees. While the former were self-sufficient crops, the olive groves represented an important crop, due to the large production available. The EVOO was produced by the monks in the olive oil mills that were part of the monastery, and the secrets of production were written down in manuscripts that only the monks knew. Such was the importance of EVOO produced by the monks, that both the Coptic Pope Benjamin I and Yusab promoted restoration standards in the infrastructure of all the monasteries, so that everyone could enjoy an area destined for the oil industry, providing the monasteries with their respective oil mills and cellars. Not only was EVOO consumed and used by the monks, but was also exported along various commercial routes to other parts of the world.