HOW IS IT GOING IN… IRAN? 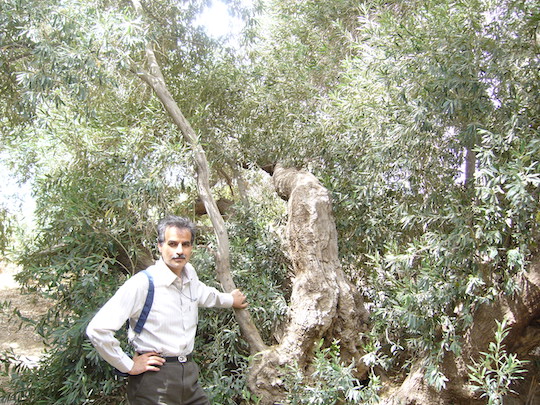 Dr. Mehdi Hosseini-Mazinani, a Ph.D. in molecular genetics from Hokkaido University, started his research on olive in Iran in 2001. Since then, he has carried out various projects in the field and led the establishment of the Iranian Olive Germplasm Bank in Golestan province, Minudasht.

Iran is a country in the Middle East with an area of more than 1,600,000 square kilometers and a population of 83 million. It borders 15 countries and is connected to the Caspian Sea in the north and to the Persian Gulf and the Sea of Oman in the south. Because of its varied climate, Iran enjoys great diversity in terms of animal and plant species, including the olive plant. Considering the interesting diversity of Iranian olive germplasm and recent plans to expand the area under olive cultivation in the country, we decided to interview an Iranian researcher in the field of olive.

Please tell us about your work.

I have worked in basic and applied research in the field of olive for two decades now at the Iranian National Institute of Genetic Engineering and Biotechnology. When we started studying Iranian olive, the extent of the diversity of the olive germplasm in the country was not known, and given the proximity of the country to the Mediterranean basin, it was assumed that Iranian olive varieties would be quite similar to the Mediterranean ones. However, over time, our research revealed an amazing and incredible degree of variation in Iranian olive genetic resources.

Accompanied by my colleagues from the Ministry of Agriculture, I made long and risky treks to hard-to-reach locations in 19 provinces, from the highlands of the Zagros mountains (part of the ancient “Fertile Crescent”) to the scorching plains of Baluchistan in southeastern Iran to find and sample solitary, Feral and wild olive trees of indeterminate and long age. Over time, we identified and genetically analyzed more than 100 unique olive tree specimens. The results were published in a series of papers and the Iranian Olive Catalogue, which was recognized as the national book of the year in the field of agriculture in 2014 and commended by the International Olive Council (IOC).

The “ZARD” cultivar is one of the best native olive cultivars in Iran. This cultivar is compatible with different climatic conditions and is cultivated broadly in the country. It is a dual-purpose, high-yield cultivar producing olive oil and canned olives of competitive quality. Another main variety, the “Mari” cultivar, is well-known as an excellent source for table olive. In addition, various Mediterranean olive cultivars are grown in Iran, among which Koroneiki, Arbequina, and Konservolia cultivars are the most cultivated.

What are the challenges of expanding olive cultivation in Iran?

Climate change is one of the most serious issues in the world, and Iran, too, is affected by this problem. Spells of extreme cold and cold weather out of the usual season are among the consequences of climate change. This situation is compounded by the great diversity of climatic conditions in the country, which includes vast swaths of arid land. Thus, we must identify and introduce new olive varieties tolerant to harsh environmental conditions, such cultivars will be adaptable to cold weather and others tolerant to drought.

Explain the relevance of your research to these challenges.

The discovery of the remarkable diversity of Iranian olive germplasm has provided great hope for finding and releasing promising new cultivars. We work in close collaboration with the Olive Office of the Ministry of Agriculture, which has a very effective role in the management and development of olive groves throughout the country. We have already identified varieties producing high-quality oil with high polyphenol content. So far, two new olive cultivars have been introduced by our colleagues at the Ministry of Agriculture, and several other new cultivars will be introduced soon.

You mentioned that you have identified a considerable variety of olives in Iran, how do you preserve this variety?

While studying olive populations in various parts of the country, we observed that numerous old trees were on the brink of destruction through human intervention or by natural elements. To preserve these valuable treasures, we propagated rooted cuttings from all old trees and planted three saplings from each old tree in a plot of land donated by a private company in Golestan province. These trees have been growing in this collection for five years now, and this year a significant number of them bore fruit. This collection provides a unique opportunity to protect these rare specimens from extinction, study their molecular and morpho-physiological characteristics, and perform breeding programs on them. Another large collection has been established in Tarom, Zanjan province, which contains more than 300 different Iranian and foreign olive varieties.

We continue our research on Iranian olive varieties in collaboration with local and international institutions such as the University of Cordoba and the Andalusian Institute of Agricultural Research and Training (IFAPA) in Spain and the Institute of Biosciences and Bioresources (IBBR-CNR) in Perugia, Italy.