HOW IS IT GOING IN… LEBANON?

Lebanon is located in the eastern Mediterranean basin, with a territory of nearly 10,500 km2 surrounded by Syria, Jordan and Palestine. It is part of the region known as «The Levant,» where the oldest evidence of the cultivation and industrialization of the olive tree can be found.

The Phoenicians, the first inhabitants of the area, were pioneers in producing and discovering the numerous nutritional and economic benefits of the olive tree approximately 4 thousand years B.C. The diverse topography, the fertile soil, the microclimates and the varieties of olives found in this territory, allow farmers to produce products with unique flavors.

In the temples of Baalbek, in the Bekaa Valley, olive oil was offered to the gods at the end of a good harvest to give thanks; the ancient inhabitants owned and worked in olive fields, on which they depended as a source of income to survive. At the same time during the bronze age (3500-1200 B.C.) they introduced cultivation first in the Greek islands and later in the continent, Greece, Italy, the south of France, Spain and finally the north of Africa.

One of the main economic activities of ts current population of 6 million inhabitants, is olive growing, which is carried out on 6% of its territory where 13 million olive trees have been planted. The annual production of olive oil in Lebanon ranges from 10,000 to 12,000 tons, of which 30% is of extra virgin quality.

For thousands of years, between September and December, the olive tree season has been carried out. Despite the hard work, olive harvesting is a joyous and exciting time for all the population who partake in it. The Lebanese wait for it and celebrate it as a sacred tradition and a thousand year old legacy.

The industrial activity of Olive Oil accounts for 70 million dollars annually. It is estimated that there are 170,000 producers of which around 350 are dedicated exclusively to olive growing and oil production in 544 registered mills.

The products of each region present a special flavour, typical of the particularities of its territory. Olive oil production varies from year to year, due to the nature of the crop, as well as the practices of the farmers, between 3 and 3.5 tons per hectare in years of high production and 1.3-1.5 tons in years of low production.

The crop is mainly grown on dry land. The pluvial precipitations are relatively abundant in the country with an average of 2200 millimeters per year, significantly higher than the regional average, which helps them to produce more and gain a better profit.

Production varies by region, ranging from 41% of the total in the north, of which 18% is in Akkar and the rest is shared between Nabatiyeh in the south-central (21%), 10% in Tyre (south coast), with 13% in the Bekaa valley (east central) and 10% on Mount Lebanon (north coast).

The most widespread varieties are Baladi and Souri, with others being found locally such as Chami in the North, Ayrouni and Sabbighi on Mount Lebanon and Bissani and Del in the Bekaa valley

Olive oil holds a very important place in Lebanese gastronomy and agriculture. It is used abundantly in all regions and dishes that are prepared. Hummus, beans, labneh and thyme (zaatar) are the traditional dishes where olive oil is one of the main ingredients.

The average consumption per person varies between 5 and 30 kg/person/year, depending on the regions. This high consumption worldwide is an indicator of the tradition and importance of olive oil in the culinary habits of Lebanon.

Rose M. Bechara, farmer and entrepreneur, born in Deir Mimas (South Lebanon), a small village nestled among hills covered with ancient olive trees (600 to 2000 years old), known as the «Bordeaux of Olive Oils,» is an part of the new Lebanese olive growing.

Its main product is Darmmess Extra Virgin Oil, a single-variety oil obtained from millenary olive trees of the Baladi variety, located in Marjayoun Caza (South Lebanon) and organically grown. It is the first oil from thousand-year-old olive trees extracted in a high-tech oil mill that ensures the organoleptic quality and maintenance of the product’s healthy properties.

This young businesswoman is in charge of the whole productive and commercialization chain. She acquired her passion for olive growing through her family, and although her professional background is in neuro marketing, and brand management for high-end markets, she researched and trained to understand the intrinsic characteristics of the product and its health benefits. Coming from a region with differential geographical features, soil quality, high rainfall and height of 580 meters above sea level, she figured out that it was possible to obtain oil of unique quality.

Her dream of producing a different oil with the particularities of the region became a reality in early October 2019, with the launch of Darmmess Premium EVOO, the result of her passion for this ancient activity that made it possible to overcome difficulties and obstacles to reach his goal and drive the rapid growth of the brand. 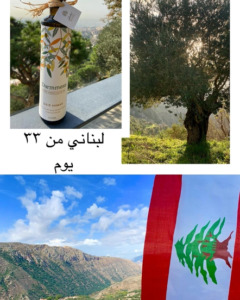 In its second year, and after two international awards in Italy and Japan, Darmmess is now available to the public worldwide.

Its unique, complex yet harmonious flavor, reminiscent of green olives with spicy bitter notes and a fruity aroma, makes it an Extra Virgin Olive Oil developed exclusively for a niche market of true connoisseurs.

For this market segment of High Range Oils (only 30% of the Lebanese production is extra virgin quality), Bechara imagines a bright future both nationally and regionally.

Olive oil is included among the products offered by the most outstanding food companies in the country due to its intrinsic qualities, history and tradition. In the difficult times the country is going through, producers and businessmen are focused on promoting and developing this product category locally and globally.

From the organization «Women In Olive Oil Lebanon» (member of Women In Olive Oil Global, founded in the United States by Jill Myers in May 2020), they seek to introduce themselves with their profile in the world of Olive Oil, empowering themselves and benefiting from their mutual experiences and enriching backgrounds, to build short and long term business plans, through which to change the world of olive oil: from regulations and standards, to education and awareness.

Rose Bechara reflects on the reality of Lebanon, a very small country, so they will never be able to compete globally in terms of quantity, but aspire to be able to excel in the market of quality.