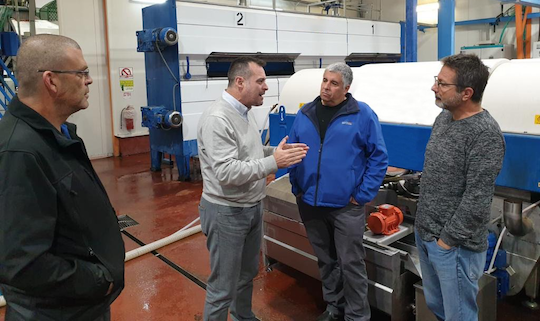 The International Olive Analyst, professor and consultant Juan Vilar, is responsible for this mission. He has already led similar strategic endeavors in olive growing in a variety of different countries including: Tunisia, New Zealand, Portugal (especially Alentejo), Argentina (Catamarca), Spain (Andalusia and Extremadura), as well as other countries (61 total where olive growing is present. And, he has done so in the most exclusively descriptive and analytical way.

In this particular case, the Israeli Olive Council, in collaboration with the Ministry of Agriculture, Livestock and Environment and the International Olive Council, are carrying out a program of diagnosis, optimization and development of Israeli olive growing.

The program aims to diagnose the integrated value chain of the Israeli olive sector and categorize it, trying to strengthen its knowledge of the world environment (supported by, among other resources, the International Olive Growing manual). Furthermore, it strives to enhance its possible technological development , as well as, if it were possible to reinforce the value chain in the field of industry, fundamentally seeking  efficiency, effectiveness and development of optimal economies from the use of resources and condescension within the environment. The program foresees the development of a series of competitive improvements, as well as the definition of medium and long term strategies.

There were various participants in the Mission, which is cataloged as a strategic one, for its content, scope, design and development. Along with Juan Vilar, there were other participants such as Uri Yogev, who is the General Director of the Israeli Olive Council, Jamal Medlege, who is from the Israeli Ministry of Agriculture and is also a governmental representative of the Olive Council. There were also scientists from the Ministry of Agriculture including Dr. Touma Aboud, Dr. Arnon Dag, and Dr. Mazen Ali. They were among other authorities, scientists, olive and oil producers present.

During the program, several oil mills of the country such as – Eliad Olive, Sava Habib, Pompeiam Israel, Masik Kibbutz Magal, Spring Valley Teva Gev Mion, and Shemen Daron, among others, were visited. All these oil mills, which belong to the Israeli Olive Council, combine to amount to thousands of hectares of olive groves of all different categories.

Israel has olive growing in its blood, and it is easy to see the passion they have for this crop and for this philosophy of life it brings along. Here, there are more than 35 thousand hectares of olive groves. More than 80% of the production of these groves goes to olive oil mills. Furthermore, most of the country’s olive groves are intensive and traditional, although olive grove in hedges are becoming more common, and already represent more than 7%.

In both cases, the consumption per capita of olive oil and table olives is 2.5 kg per year.  Also, the consumers here depend on exports in the same way for both products, importing 14% and 25%, respectively. The fundamental varieties are Barnea, Ascal, Suri, and Nabalí, in addition to Arbequina, Koroneiki, Arbosana, etc. There are a total of 110 oil mills, one of them is a cooperative, and the rest are industrial, and domestic or family plants. It also has 12 table olive mills.

30% of the olive groves are rainfed. Water is a highly valued resource in this country. At the moment, the sector finds itself in the middle of a harvest campaign, and it is obtaining excellent olive oils, which are mainly virgin extras.