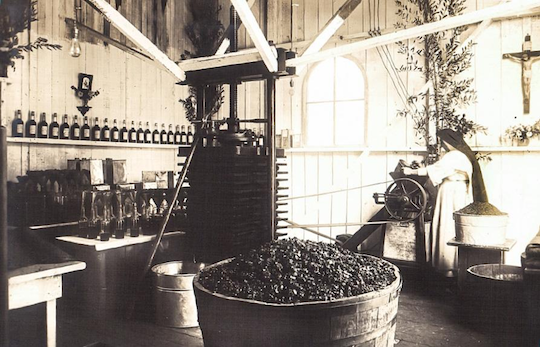 The San Jose Mission, located in Fremont, California near San Francisco Bay corresponds to the fourteenth mission established in California, formerly thought of as New Spain . It was founded in 1797 by Father Fermín Francisco de Lasúen, the successor of Fray Junipero Serra, the founder of the first Californian mission and father of the Mission olive variety, which extended throughout the Sacramento Valley and is very much appreciated for the oil obtained from it in the Butte Valley.

The mission had its heyday and great prosperity in the period of the decade between 1824 and 1836. Despite the initial hostility of the Indians, the mission came to have seven thousand head of cattle, twelve thousand sheep and 850 horses, as well as community gardens and olive trees that, thanks to Junipero, spread in this area.

In 1836, the mission was secularized, and began its decline, some of its buildings were looted and the Indians who belonged to it were dispersed. Then, in 1868 an earthquake destroyed the church. It was not until the mid-1980s that a replica of the initial mission facilities was built.

Today, it is called the Motherhouse of the Dominican Sisters of the San Jose Mission. These sisters arrived there at the request of the Archbishop to teach all the children of immigrants who had recently arrived in California, and thus begin a mission of education.

The sisters, dedicated to serving the young, poor and vulnerable, extend their hospitality by sharing the gift of their Motherhouse with their guests, which is the peace and tranquility that is breathed in the vicinity of the community. The sacred land that was cultivated by the generations of the first people who brought the mission there left behind a great legacy, the olive tree. Today, these Dominican sisters care for and cultivate the trees left behind.

These are 200 olive trees planted by Francisco de Lasúen himself, which produces olives of excellent quality that are the fruit of his careful work and environmentally sustainable practices. The EVOO obtained is of rigorous quality and is produced and sold once a year in the church’s Holiday Boutique. This olive oil is used as sacramental oil for the Diocese of Oakland as well.

The Dominicans are actively involved in the care, cultivation and harvest of these olive trees, and are colloquially known as olive farming sisters. They have created community programs to participate with them in the harvesting of olives and the production of this delicacy, EVOO. Their purpose is to bring people closer to what they consider a sacred crop.