ORVIETO: A CITY WITH AN UNDERGROUND OLIVE OIL MILL 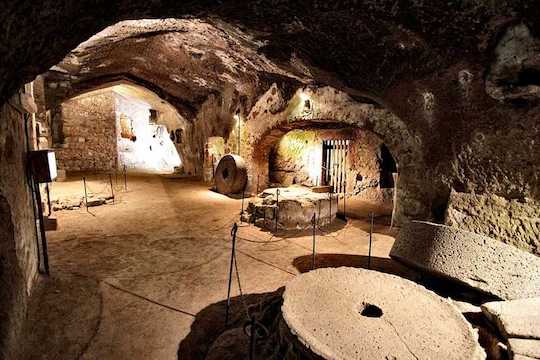 Orvieto is a city located in the province of Terni in the Italian region of Umbria. It is a city that sits between the foothills of the Paglia and Chiani River. It has an altitude which is 50 meters higher than all the surrounding terrain, because it was formed by volcanic activity. Etruscans, Romans, Ostrogoths and Byzantines are some of the civilizations that have inhabited this peculiar place.

The Etruscans were the first ones to drill to search for aquifers. They completed wells and aquifers to store river waters. In the middle ages, the network of hydraulic works was expanded, as underground galleries that would bring water to the sources were created. The extraction of quarries to extract tuff and pozzolana, which is a material that would be used later for construction, cleared out space to make caverns.  These would later be used as grain and cellar deposits for the wine and EVOO produced here.

This network of tunnels, caverns and underground caves, would provide Orvieto with an ideal infrastructure for the construction of an olive oil mill with cone-shaped grinding stones. These are typical Italian style objects that would produce the special EVOO coming from Dolce Agogis olive trees. This is the predominant variety in this area.  It gives the EVOO produced a characteristic sweet flavor that, together with notes of almond and olive leaf, make it truly unique. It has been being produced as such for hundreds of years, in such a truly special layer in the underground heart of Orvieto.