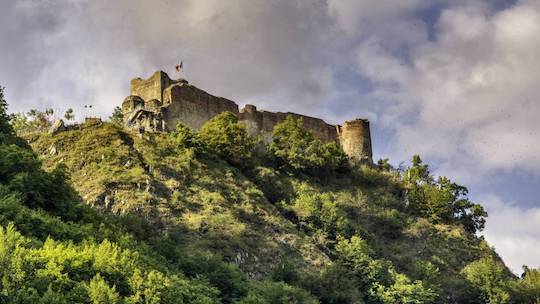 Dracula is one of the most recognized horror novels of all time. Its author, BramStoker, based Dracula on the historical figure of Vlad Tepes, known as Vlad «the Impaler.» Vlad lived in the 15th century and was prince of Wallachia, which today together with Moldova and Transylvania constitute Romania. He stopped the advance of the Ottomans, so he is known as a hero in his land. He is famously known for implementing the capital punishment of impalement.

The term ‘Dracul’ means ‘the son of Dracul’ in Romanian. He and his father belonged to the Order of the Dragon. All the members of this order wore black capes.

With the intention of owning a dwelling at the top of a precipice of steep rock, Vlad restored the Poenari Castle, located in the central part of Romania. The castle is located in the valley of the Arges River, which currently contains the Vidraru Dam, which is the most famous in the nation. Another interesting fact about the castle is that it also had a small oil mill in the cellar basements, adjacent to the pantries and very close to the dungeon area, which Vlad had a morbid fascination for since childhood.

The castle was surrounded by olive trees of the Tafilah and Aljun varieties, which are resistant to the cold temperatures in the mountain valley the castle is located in.

In the castle, olive oil was used for lighting, ointment and for food. It is also possible that it was used with Dracula’s favorite dish: human blood. Not only was it used for these things, but also for knighting ceremonies of nobles, dukes, counts, kings, etc.

Perhaps Vlad’s love for EVOO, in addition to its organoleptic and sensory characteristics that appeased the darks desires of the impaler, comes from the EVOO used in the anointing ceremony he received when he was made prince and king. Maybe it was a symbol of protection and power he was going to receive.

Some of these ancient olive trees that fed many and fulfilled Dracula’s desires can be seen today around the ruins of the castle.