REFLECTING ON THE PAST FOR INSPIRATION… JORGE PEREIRA

Jorge PEREIRA, a Doctor and Master in Science, graduated from the University of the Republic of Uruguay, and has been working in teaching and research since 1989. In 2005, he worked as professor of Genetics at the Faculty of Agronomy. Also, he received the initiative from Uruguayan olive growers to carry out a survey and classification of olive germplasm existing since uncertain times. From that moment on, he began to feel passion for this crop and its star product. He first specialized in morphological and molecular techniques for the varietal identification of olive trees in 2011 at the University of Cordoba (Spain) and obtained the diplomas of Higher Technician in Olive Growing (2016) and Elaiotecnia (2018) at IFAPA Córdoba and Jaen. He never lost his passion for the olive oil world and in 2012 he completed a Sommelier and Tasting certification in the laboratory of the Faculty of Chemistry, validated by the IOC, where between 2013 and 2017 he was part of the Uruguayan Tasting Panel. He was an advisor in the development of the Strategic Plan for Uruguayan Olive Growing in 2012. Based on these national and international experiences, he started to research International Olive Growing, and in 2017, together with Juan Vilar, they periodically presented their analysis and perspectives together. In 2018, they produced the first version of «International Olive Growing: Worldwide Analysis and Summary,» which was translated into five languages and which has been requested electronically more than 100 thousand times. He has also been a columnist of specialized magazines in the United States, Spain, Algeria and was the international editor of “Azeites&Olivais,” the first publication in South America on the subject. Since 2015, he has represented Uruguay before the IOC on genetic olive resources. He has participated as an exhibitor in the most important events in the world such as EXPOLIVA, WOOE and O_LIVE in Jaén (2018), where he made a speech about the environmental relevance of the olive tree. He developed the first prospection and analysis of Centennial Olive Trees in Uruguay, genetically characterized that are in the Germplasm Bank of INIA-Uruguay. He is an International Consultant in Olive Growing, Elaiotecnia, Strategic Analysis and a Judge of International Olive Oil Competitions. He has participated in one hundred scientific contributions in reputable journals, international scientific studies and is extremely passionate about olive growing and his country.

His life motto is «What I sow, my children and friends reap. For them to reach out and achieve their dreams is the greatest achievement of a professional in science.»

How did olive growing come to Uruguay?

The olive tree originated in the Mediterranean basin and left that area for the first time at the beginning of the 16th century when it arrived at the American continent. That is where the history of this crop began. It came from the Caribbean Sea to Alaska and Tierra del Fuego. In South America, the dispersion linked to olive trees came from Peru, where it was cultivated successfully for the first time. Then, this spread to the south, along the Pacific coast to Chile. After crossing the Andes Mountains, it settled in Argentina, and reached the Atlantic coast. Then, at the beginning of the 19th century, it spread to Montevideo, which is the current capital of Uruguay. Initially, it was used by Spanish clergymen for religious celebrations and for lighting on some occasions. There are also undated indications of an introduction by the Portuguese, presumably in the middle of the 18th century in Colonia del Sacramento. The climate of this territory, located between 30 and 35° south latitude, was favourable for cultivation, although the soils and the fact that people only traditionally had livestock did not help it spread very much. Therefore, it was restricted to the periphery of some population centres on the southern coast. The little oil and olives that were consumed came from Spain, Italy or Portugal at the request of immigrants of those nationalities. Then, in the 20th century, during the Spanish war, the so-called «fat crisis» occurred and the region began a policy of import substitution, encouraging the cultivation of non-traditional products. This became a reality in 1937 with the law to promote olive growing and the development of cultivation on a commercial scale. There are still plantations made by Europeans that have 10 x 10 metre frames along with stone mills. At the end of the 20th century, mainly due to the impulse of foreign investors, «Modern Olive Growing» began, which is currently being developed in all the departments of the country. In total, there is an area of approximately 10 thousand hectares, mostly located on the southern coast of the territory and in the area of the highest mountain ranges in the country, which do not exceed 600 metres in height. The new plantations follow the intensive model, and there are a dozen varieties that are grown including such names as Arbequina, Coratina, Frantoio and Picual, among others. 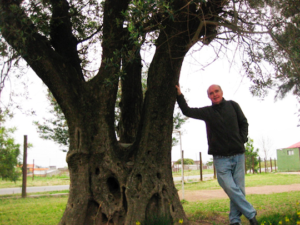 Opinion on the current situation of the sector:

Nowadays, there are extremely high quality products in the sector due to the great technology that is available, both in the cultivation and in the extraction of Olive Oil.. There are a hundred producers in the country, 40 oil mills distributed homogeneously throughout the territory. Because of this, there is an excellent processing capacity  that is able to reach the quality of excellence that has been proposed by the Uruguayan olive sector. With the food habits established for centuries in the country, plus the campaigns meant to spread knowledge about the culinary and health benefits of the product, the country has reached an average consumption of 0.5 lt of oil per person a year. Uruguay is not one of the most consumerist countries in the world either in general, but their regional olive oil consumption really stands out.

Olive Oil consumption in Uruguay is a stable 1700 tons per year. However, until 2018, the national production did not exceed 500 tons/year. This has affected the profile Uruguayan consumers, who are used to consuming imported oils. In 2019, a record harvest of 2700 tons of oil was obtained. Despite producing such a quantity, this event did not change the characteristics of the domestic market as domestic consumption did not increase, imports remained at historical levels and this overproduction did not manage to be placed either in the domestic or foreign market. The challenges are both in the field and in the industry. In Uruguay there are about 3.5 million olive trees. The vast majority are reaching their optimal level of production. This made the record harvest of 2019 possible, but in 2020 it was reduced to 500 tons. Logically, the inability to manage the alternation of the olive tree is raised, which with the technified human resources that the country has should be solved. However, the production is not managing to stabilize itself on an average level, which should be in the thousand tons of oil/year. The other challenge is the loyalty of the population with the national production. Imported oils are more than half of the consumption of Uruguayans. When the opportunity arose to satisfy the demand with national production, this was not achieved, nor was it possible to increase consumption levels. There is still a long way to go to achieve sustainability in Uruguayan olive growing, and the COVID-19 pandemic was the last straw. The prevailing attitude among producers is to prepare for the new harvest but logically, the level of uncertainty is greater than the level of certainty. Nevertheless, Uruguayans always trust in their own strength and the future. We are surrounded by two world powers in olive growing. There is Argentina, which is one of the largest producers in the world and Brazil, which is one of the largest consumers. Uruguay is currently looking to make a place for itself between these two powers.