THE FUTURE OF OLIVE OIL, FEATURING SOME OF THE MOST RECOGNIZED EXPERTS IN THE SECTOR 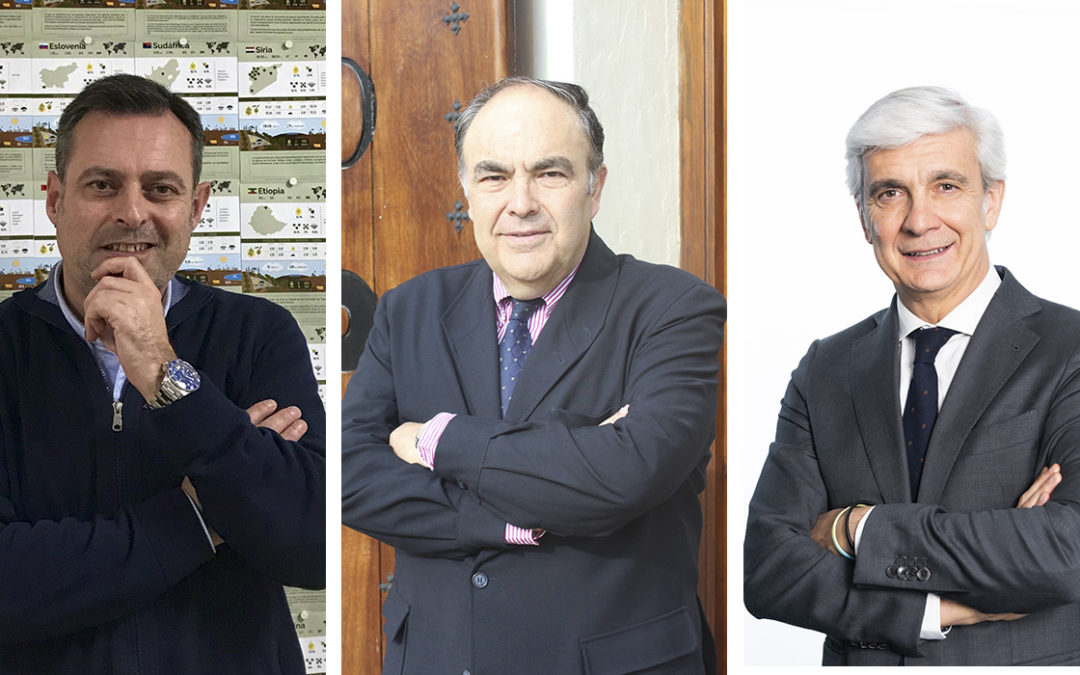 Antonio Luque, the President of DCOOP, Ignacio Silva, the President of Deoleo and the strategic consultant Juan Vilar, comment on the current situation of the olive oil sector after Covid-19 as a preview of the WOOE Conference, which is to be held on June 29 and 30 through Zoom.

The Covid-19 crisis has influenced all sectors, and the olive oil sector has been one of them. Although at first and due to the confinement «there was an increase in consumption due to the effect of stockpiling and a more sophisticated user profile that was more inclined towards higher brands, one of the effects of the crisis directly affected the purchasing power and the will to buy, which led to a fall in consumption,» says the strategic consultant Juan Vilar. In addition, «a very important channel such as Horeca was closed and there were slowdowns in international trade,» says Antonio Luque, the president of DCOOP. However, moments of transformation «always open the door to opportunity and in these months we have seen how hundreds of companies have managed to reduce the impact of the situation on their businesses, reacting with agility to adapt their services to new needs,» says Ignacio Silva, the President of Deoleo.

In addition to this situation, there is what experts in the sector call a demand crisis. «The increase in demand worldwide has led olive producers to continue increasing production in order to meet the required volume and the current model is very much conditioned by the oversupply that has been generated,» explains Ignacio Silva.  Antonio Luque adds that, «This increase in production attacks the producing sector, which is the weakest part of the chain, but there are also other circumstances which aggravate the situation such as tariffs, imports at times of surplus, the lack of will to fight for quality and the fact that olive growers are fed up with demanding regulations.»

To alleviate this situation, Antonio Luque does not see that there is a single solution, but rather that it will depend on what «the different parties are capable of doing. For example, the introduction of the compulsory setting-aside of production will depend on the government’s success in the European Union and it will also have to negotiate for the elimination of US tariffs and the Brexit agreements and promote a ban on imports. The oil mills will have to be increasingly efficient and adapt to the new circumstances of short harvesting periods and obtaining maximum quality, and in the most disadvantaged areas we can talk about promoting quality certifications such as the organic one.»

For Deloleo, the increase in production must be counteracted by focusing on quality, «nowadays it is difficult to buy quality EVOO, not because there isn’t any in the supermarket, but because the category has focused on quantity and olive oil has been used as a volume catalyst. The whole sector must be committed to working together to improve the quality of olive oil throughout the chain,» says its president. While, for Juan Vilar, it is also necessary to «promote consumption in an intense and proactive way all over the planet, especially in mature markets and users up to 50 years old.»

Precisely a few days ago, the Government launched a series of measures to ensure the viability and future of olive oil and according to Ignacio Silva, «with these measures we aim to revalue the category through quality and to achieve recognition of Spain as the leader of this category in the world.»  As far as Antonio Luque is concerned, «the only immediate and effective solution I can see is the obligatory withdrawal of production for the next season and the idea of aid for low-production, high-cost olive groves which will help the sector redefine itself.» He adds, «There is another government measure that is provoking the opposite of what it is supposed to be defending. No one doubts that the farmers should receive a fair price for their produce, but this improvised and thoughtless reform of the law of the food chain forces them to set costs and not to sell below them, which causes problems for the most vulnerable part of the sector, leaving them out of the market as they would not be able to sell anything until the price recovers.» In this sense, Juan Vilar points out: «State intervention in these sectors could make them lose their competitive capacity. Public institutions have to help create appropriate economic environments with their measures, but in this case it is the private sector that has to look for strategies that give it a higher range of competitiveness in the face of an ever-changing global environment and that are oriented towards more efficient and profitable models,» concludes Vilar.

Antonio Luque, Ignacio Silva and Juan Vilar will be present at the WOOE Conference, a virtual meeting that will be held on June 29th and 30th through Zoom and will bring together the most renowned experts in the olive oil sector under the slogan, «Challenges of the Post Covid-19 Olive Oil Sector.» The future of the sector will be addressed, as well as the challenges that will need to be faced and how to combat them. Thanks to the virtual platform, producers, oil mills, distributors and all those who belong to the olive oil sector will be able to connect wherever they are.

It has been organized by Pomona Keepers, the company that founded the World Olive Oil Exhibition (WOOE) and IFEMA. The Virtual Conference is sponsored by the Andalusian Regional Government, the Provincial Council of Jaen and the Olive Oil Interprofessional. With this virtual event, both the WOOE and IFEMA continue and expand their efforts to support the Spanish agro-food sector and to promote olive oil, a product which Spain is the largest producer of worldwide.

The World Olive Oil Exhibition (WOOE) is a renowned international gathering for buyers and producers in the olive oil sector held in Spain. The ninth annual gathering will be held on March 24th and 25th, 2021 in IFEMA (Madrid.)