THE MYSTERY OF THE BUCEGI MOUNTAINS 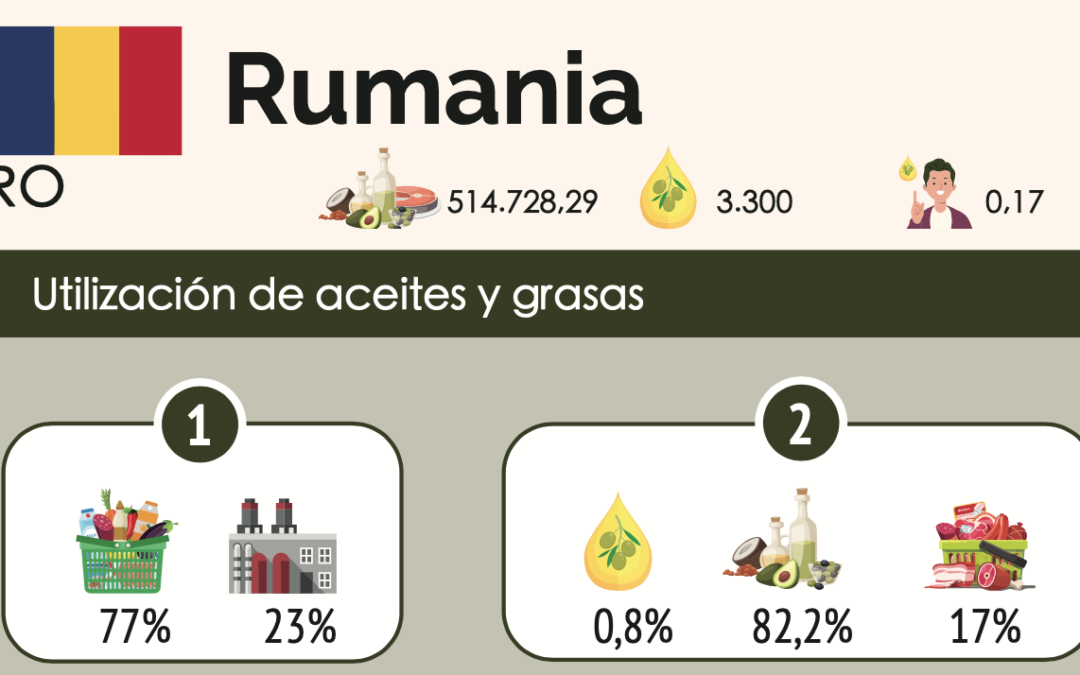 Many are the stories and legends that haunt the Bucegi Mountains, located in the Transylvanian Alps. Stories about pyramids, giants, witches, world conspiracies… but there is no denying the great similarity with Egyptian landscapes. It is known that Romania has no constructions coming from Egyptian culture, but it has some striking structures similar to mythical Egyptian constructions. The most outstanding is the sphinx, which is located on the highest peak.

Romania is located in southeastern Europe, bordering Ukraine, Moldova, Hungary and Serbia. It has an area of 237,500 km2 and around 23 million inhabitants. Its geography is strongly marked by the Carpathians, the Danube and the Black Sea. It is a territory highlighted by mountains, plateaus and plains where wheat, corn, rye, beets, potatoes and fruits are grown. Its climate is continental with warm summers and long winters marked by rain and snow, especially in the Carpathian Mountains where the largest European populations of lynx, wolves and bears live. Also, we can find one of the largest underground glaciers in the world here, known as the Scarisoara glacier. 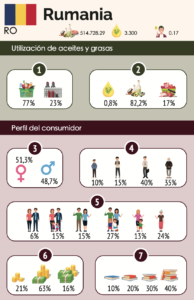 About 0.17 kg of olive oil is consumed per person. The total consumption of olive oil stands at 0.8% with respect to the other types of oils present in the Romanian market.

In terms of educational level, individuals with a higher level of education (university) have a higher consumption of olive oil (40%). However, those with no education, their consumption does not amount to more than 10%. In general, olive oil continues to be unknown to the lower-medium consumer, although its qualities are appreciated by more educated consumers.

According to the type of container, consumption is higher in PET containers (70%) and glass containers (28%). The main use of olive oil is raw, i.e. for seasoning (63%), although the use of olive oil for cooking (30%), and almost none for frying (2%) and grilling (5%) also stands out to a lesser extent than the previous one.

The main establishments where the inhabitants of Romania buy olive oil are supermarkets (44%), followed by hypermarkets (25%), with only 3% in traditional stores.

The majority of users in this country, if not all, consume the oil in their own homes (99%), only 1% do so outside their domestic environment. Outside the home, the establishments where olive oil is most consumed are in collectivities (30%), hotels (30%) and in bars and restaurants (30%). 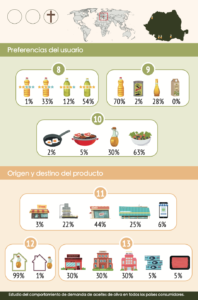 Until now, olive oil has been a less consumed product, the vast majority consuming sunflower oil from their own country. The olive oil market in Romania is booming, due to a notable health scare after the past sanitary restrictions, causing an increase in its consumption with the desire to take more care of food. Italy, Spain and Greece are the main exporters of olive oil to Romania.