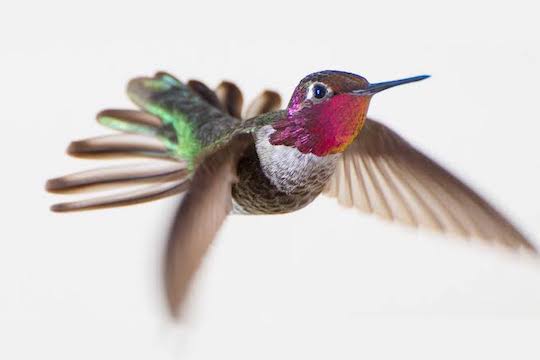 The hummingbird is a bird that is known as a messenger and guardian of time in many regions and cultures. If this bird is characterized by something, it is by the movement of its wings – it can move them 80 times per second, and this number can increase up to 200 if the hummingbird is courting the female. They can reach a speed of 90 km / h and stop on the dime. They have the highest natural metabolism of all animals in the world, ingesting up to 3 times their body weight in food per day. In fact, they need to ingest sugar every 10 or 15 minutes, since their flight style requires such great energy consumption.

All these unique features have sparked the interest of numerous researchers who would like to discover how this bird flies. It has been proven that hummingbirds have the ability to stay in the air for very long periods of time to help compensate for the weakness in its legs. Its wings are very strong and very well designed, able to compensate for all the obstacles it faces in its flight.

Other studies have shown that the aerodynamic performance hummingbirds is very similar to that of a helicopter rotor, however the birds are 27% more efficient. This, in turn, has had a great influence on modern helicopter designs.

All these discoveries have been obtained thanks to ingenious experiments that have managed to capture the details of the flight skills of this bird. One of the most curious things is that it was based on an unusual visualization technique, which consisted of introducing the hummingbird on the side of a transparent plastic box, equipped with high-speed military cameras, lasers and the most essential product of them all – EVOO. Sweetened water was thrown on the opposite side through which the hummingbird was introduced. It went to search for the food, quickly flapping its wings, flying through a mist of vaporized olive oil particles illuminated with lasers, while the camera captured the images at a speed of 1000 photos per minute. In the photos, the EVOO was seen as bright spots on a dark background. A program analyzed the movement of the oil particles to determine the air flow and the force applied by the wings of the hummingbird.

The combination of science, research and EVOO has revealed the secrets and mysteries that nature hides. This miraculous liquid, in addition to providing excellent qualities, has once again been proven to be precursor of progress and development.