THE SYRACUSE, THE LARGEST BOAT OF ANTIQUITY, HAD AN EVOO STORAGE TANK THAT WAS MORE THAN 6 TONS 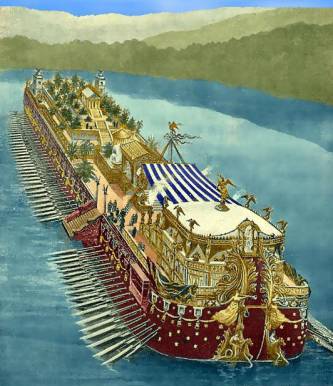 Archimedes was a great scientist, mathematician and engineer of antiquity. He was known as ‘the teacher’ and ‘the wise’. Also, he is known for great discoveries such as the screw and the death ray, a Naval defense method in which sunlight is projected with great intensity through mirrors capable of causing a fire on the enemy ship. This invention greatly helped a ship that this master designed entirely in 240 BC.

This ship was called the Syracuse, a luxury sailboat ordered to be built by the governor of Syracuse, Hieron II. It was built in order to cross the high seas and explore new navigation routes. The ship had to be prepared to house hundreds of passengers, to withstand a large load of food and equipment necessary for the voyage and to be able to defend against pirate attacks happening at that time to all types of vessels. In order to defend against these raiders, it had two large improved catapults and what is known as the Claw of Archimedes.

Archimedes worked tirelessly to design this ship. It measured 110 meters long and 24 meters wide, and was capable of transporting 1,943 passengers, 600 rowers and 400 soldiers (In comparison, the Titanic had 2,787 passengers and measured 269 meters in length, and was 21 centuries older). There were also gardens, a library, a hot water pool and a saltwater pool where fish would live until they were later served on the ship’s menu. Not only that, there was also a gym and decoration formed by marble columns, large mosaics, statues and decorative ivory elements.

The ship had 142 luxury cabins, stables for 20 horses, and a warehouse that could hold around 2,000 tons of cargo. There was also a winery with an 80 ton tank destined for drinking water. Furthermore, it housed one of the most prized assets by the master Archimedes, EVOO. Precisely there were 6 tons of EVOO that was stored in a tank. It was placed on the ship to accompany stews and dishes. The olive oil also served as a symbol of offering to the high mandatory positions of the port where it would dock, Alexandria.