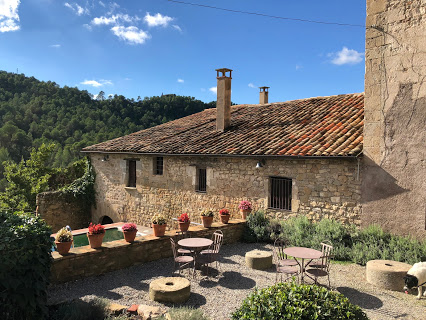 In the surroundings of the Sant Llorenç Natural Park, located in the Barcelona province, ​​there are about 14,000 hectares of a protected natural area formed by a forest containing holm oaks, pines and oak groves. These are surrounded by peaks with stepped rock walls that contain caves within them, which are the fruit of the human occupation that this place has experienced. It was in the Middle Ages when the first human settlements began to form. Proof of this are the remains of castles and fortified towers that were built between the IX-XII centuries, as well as numerous farmhouses and isolated constructions, which were normally linked to agriculture and livestock.

Various things were found at this site including:  remains of coal bunkers, where coal was manufactured from holm oaks, kilns to make lime, wineries between the vineyards and the occasional isolated olive oil mill. This is the tradition and culture has been inherited and still maintains its roots throughout this protected area.

Here we can find the Masiá del Prat de Moiá, the oldest village in the municipality of Moiá, dating to 939. Although the current building is an eighteenth century work, it is protected as a cultural asset of local interest. The building is easily recognizable, as it is where the commercial properties of the Tarradellas House could be found. This was a Spanish food company dedicated to the production of pizzas and espectec (a typical sausage from Barcelona) that mysteriously disappeared in the farmhouse of the Prat de Moiá.

Before the farmhouse was known as company where pizzas were made and where espectec was tasted, it had already been known centuries before. And it was not known for this gastronomy, but for its EVOO. At first, vineyards were one of the most important economic pillars in this region during the eighteenth and nineteenth centuries. This is demonstrated by the presence of wineries on the slopes of the mountain. However, with the arrival of phylloxera at the end of the 19th century, many of these vineyards were abandoned and many others turned into olive groves, which had already been present in the area and had been introduced several centuries before. However, only a few daring individuals were able to get EVOO that came fully from the mountains.

In the photo, we can see the stones, of Italian origin, which were used to grind the olives and create the highly desired EVOO. Peasants were the ones who worked in the bodegas at the time, which were located in the bottom parts of the house. There was an adequate temperature here and it favored the preservation of the fruit and its oil.

La Masía del Prat de Moiá was one of the go-to places in the region because of the exquisite and delicious EVOO they produced. It all came from the fruit of the environment where the crop grew. This was a place where the locals, although they were scarce in numbers, were rooted in good traditions and were delighted to consume this precious EVOO produced in in the Tarradellas House, which, before pizza and espectec, made EVOO.