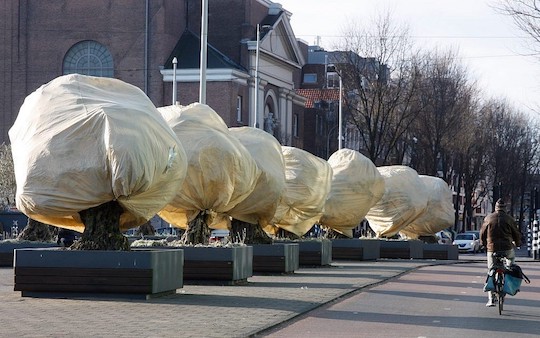 Amsterdam, the capital of the Netherlands and one of the largest cities in the country with great international presence, both financial and cultural, is a city with a moderate climate due to the influence of the Atlantic Ocean. However, there are cold winters with sub-zero temperatures and warm summers with moderate rainfall.

Amsterdam is also called the Venice of the North with its more than 100 kilometers of canals and more than 1500 bridges that cross these canals. These make up about 90 islands in the city.

Another peculiarity is in its Portuguese synagogue, the oldest Sephardic synagogue in Holland, built in the 17th century, evoking the importance and wealth of the Dutch Golden Age.

In the main plaza of the synagogue, there are 25 Spanish centenary olive trees planted that recognize the symbolism that the olive tree represents in Judaism.

With the arrival of winter, these centuries-old olive trees are given a closing ritual that involves wrapping the olives up with a huge yellow plastic covering. After being covered, they look more like giant mushrooms or large hot air balloons than olive trees.

This practice is carried out with the sole purpose of protecting the olive tree against the cold winters of the Dutch city, which include strong gusts of wind and snowfalls. In a certain way, it is similar to the Spanish Sephardic founders of the synagogue who, like the olive trees, had to adapt from the warm Spanish Mediterranean climate to the gloomy climate of Amsterdam.

These olive trees contribute in giving this place an ethical, natural and sustainable feel. Also, they can be looked at as a symbol and a monument that represent the capacity to survive and adapt. This is something that olive trees and the Jewish people have in common.

Once again, the olive tree is a participant in the symbolism between cultures, religions and civilizations prospering in every corner of the world. It is a symbol of strength, unity and sustainability that is present in more than 90 countries around the world.