HOW TO HARVEST OLIVES ON THE ROOF WITHOUT BEING SPIDERMAN

The construction of roofs with vegetation on them is already a well-practiced method in architecture. In addition to increasing the natural surface area of cities, it helps air conditioning of lower units.

In Oporto, this idea has become the face of the remodeled «Plaza de Lisboa», a building that has commercial galleries, underground parking and a roof completely covered by a park with 50 olive trees.

At one time, it was known as the «Porta da Olival», which is why the architects decided to plant olive trees in this garden.

This natural area coexists with the hustle and bustle of the big city, making it a very busy and high-valued place for its citizens. It is always very crowded with university students, tourists, environmental workers and the general public, who enjoy an «urban olive grove», the envy of Spiderman himself. 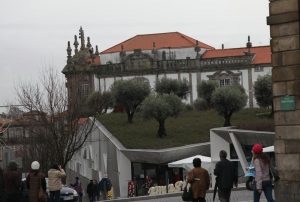 There are about 50 single trunk olive trees, covering half a hectare, with a vegetative cover, with drip irrigation, and planted on the roof. This really delights the visitors as they can drink, read, eat, or drink coffee in the shade of an olive tree on a roof.

This is one of the few olive groves in full production that is integrated in a city’s downtown, and of course, on the roof. However, it is not the only initiative of like this. In 1952 in Santa Monica (Los Angeles), California, three olive trees were planted on the fifth floor of the Rand Corporation Building. The olives from these trees were used for both table olives and olive oil. This same thing also exists at the Terence Conran’s East London.