PALESTINE, CROSSROADS OF ROADS AND EVOO 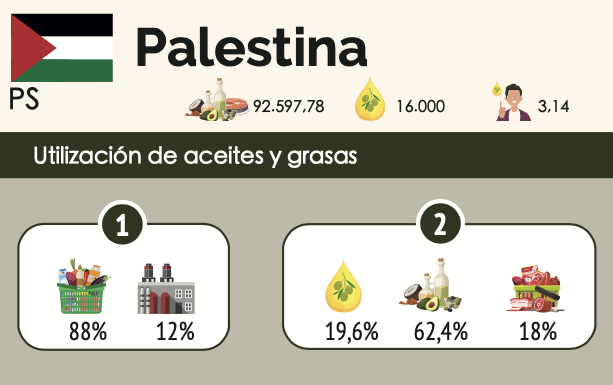 Olive cultivation in Palestine developed between 2000 and 4000 BC.

The olive tree has existed in Palestine since ancient times, as it dates back more than 4,000 years. It has always played a crucial role in the cultural, social and economic characteristics of the country.

Turkey produces 24,670 tons of oil. Of this, 57% belongs to a superior quality oil and 43% to a lower quality oil. Of the total oil produced, 4,500 tons are marketed abroad. With respect to the production of table olives, they produce around 10,000 tons, most of which are destined for export to other countries.

It has 220 olive mills, 11 olive oil mills and 90 table olive plants. It employs 9 thousand people in the sector and the turnover generated by the olive oil sector is almost 90 million euros. 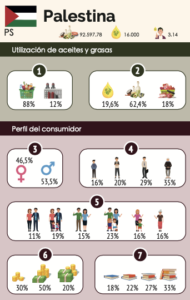 As for consumption, 19.6% of the total of animal and vegetable fats corresponds to olive oil, which translates to 16,000 tons of olive oil. Olive oil is consumed in greater proportion by men than by women, at 53.5% and 46.5%, respectively.

The establishments most used by the Palestinian population to purchase olive oil are supermarkets (37%) and hypermarkets (25%). 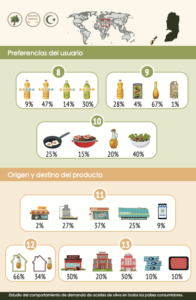 The majority consume olive oil in their own homes (66%), but it is true that the remaining 34% do so outside the home. Outside the home, the establishments where the greatest proportion of olive oil is consumed are bars and restaurants (30%), hotels (30%) and collectivities (20%).