REFLECTING ON THE PAST FOR INSPIRATION… ANTONIO ABRIL BENITEZ 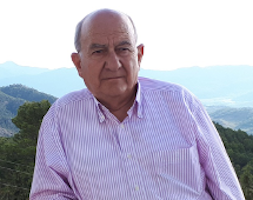 I studied to be an Industrial Master and Draughtsman at the Universidad Laboral de Córdoba. All my professional life has been connected to Calderería Manzano, s.a.. I worked here from 1985 to 2010 in different positions until I became Technical Director. In this time, we made important innovations in oil mills.

For example, when the decanter went from the three phases to the two phases we made an impact. The pomace that was produced was difficult to transport and we developed and patented a piston pump that completely changed the design of the oil mills, thus solving the problem that existed with this product.

From 1960, when I started to get to know the olive oil sector, until the 1990s approximately, the quality of olive oil did not have much recognition, since most of the production went to the large refineries and once refined, it was bottled as pure olive oil. Therefore, I invested more time in having a good warehouse called «troje,» which had the capacity to produce up to 10,000 tons. When the olives were milled, the quality of the oil was very poor, so much so that I remember that they had to smoke this oil in the kitchens where they used it. They had to do so with a piece of bread or an orange peel to remove the bad smell.

As production was not normally very large, there was little oil left in the cellars from one season to the next and despite this and the intervention or guarantee of prices, olive groves was not very profitable for the farmers. Also, this was due to seed oils such as that of sunflower oil, which were supported by the many international companies in the sector that made it a fairly large competition.

At the end of the 70s and beginning of the 80s, olive groves started to become mechanized within their possibilities and one thing that I think was quite important was the cleaning of the fruit, which was not done in the field, but in the oil mill. This resulted in a faster harvest and a higher quality fruit. However, the oil mills then had to invest in machinery and space for this situation. Also, with the arrival of the centrifugation systems, the number of kilos processed increased simultaneously with improvements in quality.

Since the entry of Spain into the EU, oil mills, with the help of the EAGGF from 1997 onwards, have been modernizing their machinery and storage, and are thus better prepared to produce a higher percentage of extra virgin oil.

Today, with super-intensive plantations, production has increased so much that there are many surpluses at the end of each marketing year and consumption has not increased as much as production. I believe that this is the challenge we come across today. We must ensure that olive oil prices are profitable throughout this sector, since they are currently not beneficial for traditional olive groves, which are so important for the economy and the environment of Andalusia.